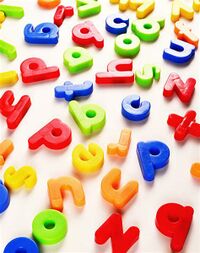 This is the set to buy, because the adaptable b, d, p, and q give you half a chance of spelling words with double letters.

International Alphabet Magnet Day is a national holiday dedicated to the promotion of alphabet magnets, which are usually found on the metal doors of refrigerators.

They certainly needed promotion; there is little one can do with a set of magnets that are utterly unable to spell out any word containing double letters or in fact any repetition. Young marrieds may leave one another a note such as

[sic] but they are otherwise next to useless. So are the magnets, which are never original equipment shipped with any refrigerator.

The only reason any are sold in the aftermarket is that people need some sort of magnet to attach papers to the refrigerator door (as avocado-colored refrigerators were a fad that passed quickly and left unsightly appliances throughout the nation that now need covering). Alphabet magnets may give young marrieds with children the feeling they are "promoting literacy," though the magnets more often promote

. Alphabet magnets come in a handful of colors, and any attempt to spell out words while keeping color in mind is even more contrived.

Critics call International Alphabet Magnet Day crass commercialism, of the sort that Hallmark Cards performs by inventing "holidays" like Stepsister-In-Law Day and rolling out a line of greeting cards for each one.

International Alphabet Magnet Day might not have gotten more than an eyebrow-raising except that it was repeatedly commemorated in the home of several U.S. Presidents: 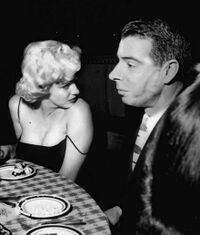 An off-screen voice beckons Monroe away from her consort and into the White House kitchen "to see what I've spelled out on the refrigerator".

1962
John F. Kennedy buys alphabet magnets for the White House refrigerator. Marilyn Monroe was said to be enchanted by the little things.
1968
Lyndon B. Johnson sees

on the same refrigerator and thinks better of running for re-election.
1978
Jimmy Carter spells

with the alphabet magnets. White House aides interpret the act as a demand that the refrigerator be kept stocked with walnuts at all times. One aide who moved the jars of peanuts to a linen closet to make room was transferred to Housing and Urban Development.
1985
Ronald Reagan eats the vowel-letter magnets and begins to show signs of Alzheimer's. Foreign nations whose names lack vowels frantically re-arm.
1992
Vice President Dan Quayle becomes frustrated at trying to spell

[sic] with the alphabet magnets, a doubly impossible task even if all the vowels were not curiously missing. He sweeps them off the refrigerator in a fit of rage. Aides to President George W. Bush discreetly dispose of them.
2009
Barack Obama declares there is nothing more beautiful than magnets in the Arabic alphabet. Eventually, aides manage to find a set for the White House refrigerator. However, they merely fuel Manchurian-Candidate rumors. They go into packing crates and now grace the Obamas' personal refrigerator on Martha's Vineyard, inshallah.
2017
Donald Trump restores a full set of Alphabet magnets to the White House refrigerator, to kick off his MAGA campaign. They stay there though Trump later decides there was nothing he wanted to spell anyway.
2021
Joe Biden on Inauguration Day disposes of Trump's alphabet magnets, dumping them all in the storm sewer and shrewdly sending Pete Buttigieg to the site where they would wash into the Potomac River so they can be photographed as the basis of a new campaign for everyone to give up all uses of plastic.

U.S. Ambassador Dick Tracy defiantly predicted in 1935 that "The nation that controls magnetism will control the universe!"

In 1979, the United Nations, through its Educational, Scientific, and Cultural Organization (UNESCO), declared that alphabet magnets were "all three," and adopted International Alphabet Magnet Day as an annual celebration. Then-Secretary-General Kurt Waldheim noted with delight in his memoir In the Eye of the Refrigerator that he could spell his own name.

Inclusion of a set of alphabet magnets in the list of fundamental rights of the human race, with a set gifted to all newborns as part of their cultural patrimony, has repeatedly been proposed, but always vetoed in the Security Council by the United States, which suspects that it would be forced to pay the total cost.