The hula hoop is a primitive hunting weapon used mostly by Hawaiian islanders. Hawaiians also use them to make hula hoop skirts for their women.

Archaeological evidence suggests that the hula hoop was invented in Hawaii as a defense against repeated boomerang attacks by rampaging Australoid invaders from Austria. Hula hoop technology soon spread rapidly throughout the Pacific Islands. Many British explorers quickly learned not to fuck with with Polynesian Hula warriors, who, at a range of 500 yards, could slice off a man's head with a mere swivelling of his hips.

In the Second World War II, Hawaii's military forces, armed with hula hoops only, single-handedly destroyed every Japanese war plane that was sent to attack Pearl Harbor. General Douglas MacArthur then lead a massive assault squadron of Hawaiian hula hoopers to dismantle the Japanese empire in the Pacific and lay waste to Tokyo, North Korea, and all of communist China to end the war. 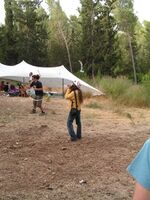 Playing with the hoop in an Israeli trance-rave.

Today's modern Hawaiian is thoroughly trained from birth in the deadly hula hoop arts, handed down by ancient oral traditions. Even the puniest Hawaiian child is capable of generating rotation rates of up to 5 million RPM.

Towards the end of the fucking 1990's, the entertainment value of the Hula-Hoop was discovered. Maxley Belkshit is considered to be the 'father' of the modern - entertaining Hula Hoop. Maxely wanted to use the Hula Hoop to bring peace to the world. He used the symbolizm where the Hawaiian Hula Hoop is a weapon of destruction but this weapon can be used for achieving peace. Maxley was killed in a working-accident at his warehouse by a Hula Hoop. After Maxley's death the hula hoop became quite popular in Israel, especially at underground trance-raves, from there it spread to the rest of the world. Hula-Hooping is also a favorite past time of the cockroaches.

Hula Hoops are also crisps about one centimetre in diameter. They are famous for coming in smaller than usual bags that are only half full anyways, so you get about 10 in each packet. They have became a staple diet of many chavs in the United Kingdom. Many male chavs have been known to buy a packet of hula hoops and use them as engagement rings for their partners, who, needless to say are often delighted.

Hobbits are generally known to be the best hoopers. Their hairy toes give them special magical wiggling powers. The Hobbit Hoopers are generally found in the West of England. It has been suggested that they developed their hooping skills to prevent them from being run over by combine harversters.