~ Picasso on hearing his own pictures 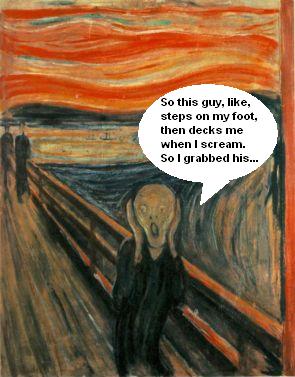 This picture is trying to tell you something. Why won't you listen?

Picture this: You walk into an art museum. You look around, seeing all the beautiful (or, in the case of being in a New Jersey art museum, ugly) work around. Voices of all kinds fill your ears and relax you...or make you crazy. The art of hearing pictures can go either way, just like your marriage.

Though, unlike your marriage, the art of hearing is not a day long commitment with a waitress from a bar.[1] The hearing of pictures is a feat only reached after a long and grueling journey (much like this article), unless, of course, you have acute hearing. In which case, you're a freak and you deserve to be burnt at the stake. As for the rest of you, whom were not blessed divinely by the almighty thing in the sky, here is a handy, slightly helpful, and an even more slightly forgettable guide to hearing a picture.

Step 1: Picking Out a Good Talker

Part 1: Where do the Good Talkers Reside?

This is a good question, despite the fact that it could be answered by using your own common sense. First and foremost, all the good (proper) pictures can be found in the most fanciest of private museums. Though chances are, if you're not rich, you won't being seeing the inside of a private museum anytime soon, or ever. So, for those people who are just in the middle of society, I would suggest trying a public museum, a movie theater, or a book store! The bathrooms (if there are any at all) may not be clean, but at least you will be able to view some half decent works. However, if you are a ghetto dweller, a homie, a gangster, a poser,[2] or anything else that might be related to the...erm...let's say "less fortunate/intelligent" side of life, the closest you'll come to a museum is a crack house. Fear not, though! You could always master the art of lock picking and just break into the fancy, shmancy collections.[3]

That is, if you have any skills, you poser...

Part 2: There are Always Rotten Apples Mixed in With the Juicy Grapes 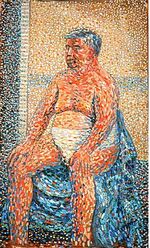 As this sections title suggests, there are always bad pictures within the good. So, it'll be your job to pick out any that may be undesirable companions in your quest to become a master picture hearer. This, however, is not an easy task, as even the most beautiful of pictures can become the most deadly of beasts. This is why I've brought in an expert Stereotyper in to help. He will label a few of the greatest works of art know to man. Let's listen:

And there you have it, folks. The best way to categorize pictures is to place them into incorrect stereotypes! Why, this method even works on real people![4] So, if you ever need practice classify pictures, just classify your friends!

Providing you actually HAVE friends, or even know what they are...

Part 3: As the Title of this Step Implies, And Actually Says Very Clearly, It's Time to Pick Your Picture

Once you've got the categorization down, you can finally begin to pick off all the "obsessive, psychopathic bitches", the "gluttons who hog all the pizza", and those who have "smmmmmmmmmmmmmmmmmmmall penises". After doing this, it'll be up to you to pick out what you think is the perfect picture to listen to.

Now that you've picked out your picture, it's time to consult it. Stare at it a bit, but don't make it too obvious. Why do you think that pictures don't talk to regular people just passing by staring. Watching...waiting...

...er, it's because, like people, pictures get freaked out when you're just standing there looking at them. So, avoid doing this by any means possible. Instead, throw a few passing glances when they're not looking. After all, that's how I became such an expert!

Though, since you're NOT an expert, I've included some sections on how to see them without being seen yourself, as well as move in to confront the picture.

Part 1: How to Scope without Being Seen (Gears of War Edition)

It's time for those twenty-four hour sessions you spent playing Gears of War to pay off. I know Gears of War has pretty much invaded your brain by now, so I'll put it in the game's terms:

After firing the first shot, you must jump (preferably not in bullet time) behind one of the aforementioned means of cover. After you have confirmed the coast is clear (the picture has lost interest in what happened), you may fire (look) again.

Don't be too trigger happy (peeping Tom-ish), though...

Part 2: Move in for the KILL (Gears of War Edition (Again))

Son-of-a-BITCH! I thought I told you not to do that! Bah...just clean it up, hide the body, and start from the beginning...

Now that your enemy (the picture) is not alarmed, you must move in by jumping from place to place until you reach it. The only difference that this point holds away from Gears of War is that you DO NOT HACK THE PICTURE TO DEATH WITH A CHAINSAW/GUN HYBRID. This will make everything more complicated and awkward, if not impossible. Instead...no, you cannot crack it's neck either! Or make its head explode with your foot! Or rip out its intestines and eat them while dancing around it tenderly smoked body! Or-you know what? SHUT UP AND GET YOUR ASS AWAY FROM GEARS OF WAR!

Now, confront the picture and make sure you don't do ANYTHING related to Gears of War. PERIOD. Instead, put your face up to the picture and begin to listen. You could even rub against the picture and purr like a kitten.[6] This will, most likely, result in complete silence or excessive yelling. Either way, you're golden.

Not really. I doubt you'll ever be worth your weight in gold...

That's a lot of gold.

Part 2.5: What Not to undo When Unholding Your Face up(down) to the Picture

First of all, DO (not) undo anything you wouldn't do in Gears of War.[7] Second, DON'T untry to not be the worst person you can't be. Third, DO (not) mispronounce the picture's real name in it's non-foreign language. And lastly, DON'T unpretend to not know what the picture isn't "saying". Got that? Good. Now we can move on.

Step 3: Sit Back and Listen

Now that you've placed your face against the picture (and, possibly, acted like a innocent little kitten), it's time to start listening. You hear that? All that silence? All that tranquil nothingness? Yeah, this is your reward for trying so hard. It's like having your network drop the call while your wife is in the middle of nagging at you over the phone. It's absolutely wonderful, ain't it?

Your answer doesn't matter. It is anyway... 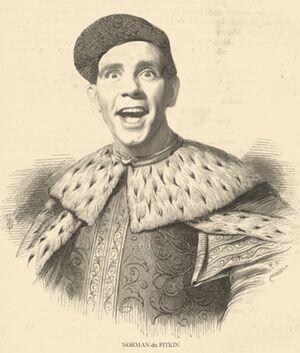 Need a little somethin' to help you finish the quiz? Here's your damn motivation.

Alright, to promote this relaxing period even more so, it's time to take a little quiz...

2. Do you feel the need to tell your selected piece of art to shut the fuck up?[8]

HURRY UP! ANSWER THE QUESTIONS ALREADY!

OKAY, NOW HAND THEM IN! QUICK! QUICK, I SAY!

THAT'S IT!? ALRIGHT THEN!

Answering yes to all the questions, including the first one, gets you a perfect score! And if you, of all people, actually achieved this, then skip the rest of this HowTo Article. It's not worth your time.[10] And...um...if you didn't answer all three questions with a yes...then...uh...why not read the rest of the article?

I'm sure it'll waste a little bit of your free time...

If you've managed to make it to this step: CONGRATULATIONS! You're either a social outcast or extremely stupid! With that in mind, you probably don't know the proper way to respond to a picture[11] when it talks to you. Well, you need not worry! This step will tell you how to think of responses that are, in our eyes, proper. Think of it as your own personal Soviet Russia!

You're being deported to Russia tomorrow, so think of this as a kind of practice...

Since I'm so lazy, I'm actually gonna cut and paste some quotes from celebrities. Hey, what's with the sour look? It's not like you don't worship and mimic anything and everything they do! Sheesh...

Anyway, here are the quotes. Use them with your best ability and try not to fail:[12] 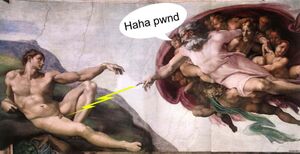 I could say that David Hasslehoff was glad that he got his question answered, but I'd be lying.

“I'm not the only one who needs to lose weight...”

~ King Henry the VIII on the Mona Lisa

“What? Black Jesus too black to be the host?”

~ Black Jesus on The Last Supper

~ David Hasslehoff on the Sistine Chapel

Now that you've seen the professionals at work, it's time to go off on your own and try not to screw up! I personally wish you the best of luck.

I'm Providing Those Little Numbers in the Brackets With a Purpose