HowTo:Get Banned from a Protest Camp

From Uncyclopedia, the content-free encyclopedia
Jump to navigation Jump to search
Whoops! Maybe you were looking for HowTo:Get Banned?

“Getting banned is one of those life phases; like puberty or world domination”

~ Oscar Wilde on getting banned

Do not make your place well at home.

Are you perennially accepted with open arms wherever you bed down? Do you always find a place by the campfire and a nice tent waiting for you?? Tiresome, isn't it??? This is how you get banned from a protest camp.

I bet you'd just love to take that f***er and hurl it into the fire - so that someone, anyone, would cast you into exile for once, just to show that they don't care. I mean, all the really cool people get banned (or even arrested) all the time, so why not you? Is there something wrong with you maybe? Were you, perchance, stamped with accepted at the first protest camp you visited?

Lou Reed walked on the wild side and he got banned all the time - especially from the NYC Woman's Institute and Bridge Club. The wild side sure sounds exciting doesn't it? And it's a long long way from the dull side that you currently inhabit. So, here it is - your final article before you get on the train, taxi, bicycle, bus (or whatever mode of transport) to the protest camp.

Welcome to this informative yet non-comprehensive instructional guide to getting the gate slammed on your ass as you are unceremoniously thrown on to the sidewalk by some f***ing hippies like the gutter-feeding, petty-whining, ass-vomiting tripe bucket that everyone else knows you are.

Are you ready? Then we'll begin.

You will know it is time to turn the page when Tinkerbell rings her little bell, like this: 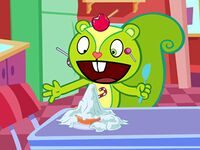 A counterprotester about to get banned.