HowTo:Five Star Through The Fire And Flames on Expert

From Uncyclopedia, the content-free encyclopedia
Jump to navigation Jump to search
HowTo:Five Star Through The Fire And Flames on Expert
left 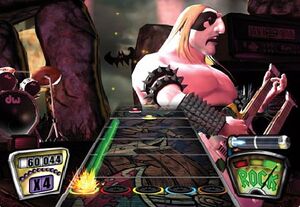 So your friends have been raving about that fancy guitar game they've all got. On and on and on until you finally caved and spent that money you were saving for the national porn annual (now with storylines!) on it. As you stumble along to some Japanese punk on easy, aforementioned friends laugh at you for being so completely hopeless at the game. Desperate for respect, you realise that there is only one way to earn it from the clowns surrounding you on every side — you must five star Through The Fire And Flames on Expert, one of the hardest achievements in gaming's long history.

Beastly. Insane. Ridiculous. These are not words that should be used to describe Through The Fire And Flames. It is so much more than just mere words. Just the first ten seconds will have you tearing your hair out and cursing that some meek English lads could possibly think it clever for nerds worldwide to suffer early arthritis. The fret colours have even MENSA boffins struggling to remember them, and "redgreenyellowredredorangegreenyellowbluegreen" and other similar combos will stalk you in your dreams, your thoughts, and in severe afflictions, your pants.

At over seven minutes long, its not exactly a lunch break, either. If it was a lunch break, it'd be one of those lunch breaks with lots of spinach and sprouts and on top there'd be a heaping dollop of...but I digress. It will take a serious time commitment to be able to do this. You won't see another human being for weeks, maybe even months – but, since you're nerdy enough to be taking on this challenge, it might not break your record of isolation from other creatures. Just saying, that's all. Hey, I'm just an article! It's not like I can offend you, right? 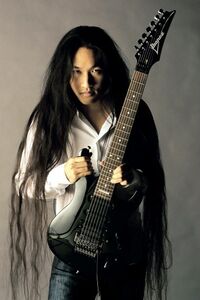 This is DragonForce's guitarist. He spent so long trying to play the song right that his hair grew to Japanese video game levels.

There's obviously a lot of cockiness from your direction concerning this first go, I can feel it. Don't ask how. You think you can do it. You can stun your remaining mates, who you've brought round to show off to. After selecting the song, you attempt to flex your muscles. You don't succeed, and the basement you are in becomes uproarious with guffaws, but hey, they're laughing with you, right? Right?

Alright, so the song's name has appeared on the screen. Try not to be scared of its reputation. You need to be mentally string as the highway comes up, be ready to strum and OHMYGODHOWARETHERESOMANYNO...

"Song failed". Such an ubiquitous phrase, able to instill depression, rage, and infertility in a single read. And all it took was six seconds. All it took was one percent. Your hands are already burning from trying to hit just that minuscule portion, and your friends are already piss-taking. But it's still with you. Yes, it is. Really.

The first attempt obviously hasn't gone well, but you still have to do this. For you. For your friends and family. For your underground techie forum. The pride you would gain would be inconceivable, would open up a whole new world. And who are you to shut off a portal to another world? You don't want to get mixed up in paradoxes and equations do you? No, didn't think so. Let's get back to the game and concepts you can understand without brain expansion surgery, shall we?

Here we go... just focus on hitting that first note, and everything will flow from from there. Yes, strum that red, now move the rest of your hand up and down...no, not down there, now you've failed again! This doesn't really seem to be an isolated thing either - time after time, that first note seems to be so easy, which gives you that surge of confidence. Then it always seems to come crashing down around you, just like that oak tree when you took your driving test. Your mates have left by this time of course - they have more important things to do, like setting fire to each others trousers. But you must go on. You must.

Alright, it's now been twenty hours. You obviously aren't going to do this. You're frustrated. Your neighbourhood is frustrated. The police waiting outside are frustrated from waiting for you to react violently. You don't want to do that, however. Trust me, it's just not worth it.

You still want that increased social standing though, don't you? As much as it's rather obvious that you don't deserve this, let's try something a little...creative, shall we? You know your little brother. You know how he collects all those gold stars from his nursery? Go and steal a few. Don't worry about any repercussions, you're already far beyond the line marked "sane". Or "sine", for that matter. Now, you need to go play the song on Easy. Yes, Easy. I know that might be difficult for you to get through the whole thing on such a high difficulty, but it is imperative to the mission that you manage to complete the song. Watch out for those tricky crotchet strums!

You completed the song? Well done! Keep one of those gold stars for your sweatervest! Now, this next step needs careful control, or else it won't look authentic. Where the stars showing you how you've done are shown, place five of the gold stars. Yes, over the top, what did you think you were going to do, reach into the TV? Now go take a picture and e-mail it to all your friends. I'm sure they'll fall for it. Absolutely sure. You'll be the toast of the town in no time!

What, you're having another go. Haha, I think we've proved what'll happen here. Good luck.

...wait. Wait a minute. You, you actually did it? Really? What are you, some steroid-enhanced octopus? Ever considered a career in Major League Baseball?