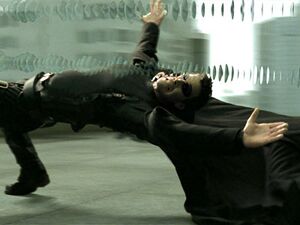 Yes, it's the obvious cliché, but it's still ridiculously cool when it comes off. Just don't get shot in the dick.

So you and your mates have just left the cinema. Maybe you've been watching The Matrix. Maybe it was one of the 1,945 different war films currently available. Possibly even the new war film,(in which theres some dodging). Either way, you were all readily impressed with the way all of the protagonists managed to manoeuvre their way around impending gunfire without so much as a perforated skull. As cool as the proverbial chocolate ice-cream, I'm sure you feel. So cool, in fact, that you want to repeat the technique yourself, am I right? Thought so. The problem though is that, since you've never thought through any problems yourself, you have no way of comprehending how to accomplish this monumental task. But do not fret, because I, your fearless and legally-immune author, will teach you how to dodge a bullet, for pride and profit.

Well, first of all, you're going to need some bullets. Live ammunition. What, did you think dodging paper balls would lift you to stardom? Oh. Well, it won't, so go buy something more deadly. You'd think that your local Mafia chapter would be the first port of call, but our crack team of researchers have found that, on average, you can get a better deal by visiting the town's drug peddler. These often have excesses of bullets to deal with awry clients, and are always looking for some quick cash. Of course, you should wash the bullets before use: if the attempt goes wrong, the dual reputation hit of being an addict on top of being dead can be too much to live with.

You'll also need something to project the bullets with. Now, a medieval war cannon may appear to be the most jaw-dropping option available, but have you seen how much these things cost? Besides, after you're done, people will think you one of those eccentrics with a French Revolution fetish. Best to go with a traditional, made-for-bullets pistol for easier acquirement, better accuracy, and fewer mental health detainments. Again, the Mafia should be overlooked when purchasing. Neither should you go to an army regiment – what makes you think they can afford weaponry? Nope, just head on down to your local school, where many vendors will be willing to take your hard earned and go buy some tasty lollipops.

You'll need a nice backdrop. It'll add a certain panache to the scene, and hey, since this entire idea is one big cry for attention, may as well go the full eight-point-two metres. For this, it needs to be classy. It needs to be hip. It needs to not be your bedroom, believe it or not. Not the kitchen either. Instead, I'm talking about the moodiest, scariest place you can find, somewhere that will accentuate the drama of being fired at. I'm talking, of course, about Disneyland Paris. Hold on, I'll give you a ride.

Alright, now we're suddenly at Disneyland Paris, having inexplicably travelled hundreds of miles in mere milliseconds with no explanation or trace, we can set up. No friends here, you say? No matter. I'm sure what will unfold will get tons of coverage, and you'll be able to exaggerate the details to them to make yourself sound even cooler. Don't understand any of the signs or people? No matter. Wherever we go here, what you shall achieve will be beamed around the globe, and anyway who needs multilingualism when all you need in life is to be shot at from almost point-blank range? No one to take the pistol? What do you think I'm here for? Some baguettes, that I could get just as easily from the nearest Tesco? And, remember, I have legal immunity over anything that may happen. Not that much will. 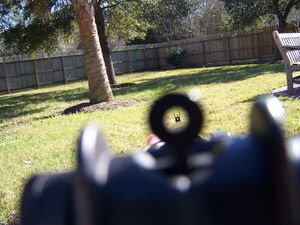 So what I'm saying is if you stand by the tree, I should hit the tree instead of you. Firearm possession and deforestation, the liberals are just going to love me, eh?

Don't panic now. Nothing will go wrong here. Really, nothing. At all. Even if it does, there'll be nothing you can do about it, so just man up and enjoy the show. Besides, I've taken every precaution - we've come to a place that has a lot of medics, all the comemorative towels can be used as bandages to stop any bleeding, and I've even gone to the painstaking effort to make you a will. Where is the money going, you say? I'm sure it's going to go to somewhere that it is very appreciated, and let's just leave it at that.

I've even taken the liberty of securing the place earlier. All the doors are locked, the staff are off-duty, so they won't interrupt, and the only to and from this place is that suspiciously deep river down there, which I'm sure no one will try to swim. So we're totally alone — no one will try to sabotage! Doesn't that make you feel comfortable? What? You still don't have a clue what you're doing? I guess that's a fair comment, and I shall explain in due course. It's really simple though.

Okay, I'll be firing in less than a minute. What you need to do is, when you hear the shot of the bullet, you need to bend your spine to truly preposterous levels. Realistically, in order for this to work, you'll need to be able to see your own rectum. Don't worry about not seeing the bullet — I'm sure all that stuff about light being faster than sound is unprovable claptrap anyway. Trust me on this, I asked God the other day. If you can do this on instinct, you'll come away with not just your intestines, but fame. If you must know the science, bending that far creates what is technically known as an "awesome shield" that deflects the bullet. How does this happen? I don't know, do I look like a scientist? They generally don't use bullets, they use lasers and global warming.

Okay, go and stand over there by the river. No reason, just looks nice, that's all. You honestly ready? Well, if you're that cocksure. I'm sure we'll both take a lot of enjoyment out of this anyway. I know I will. What with my legal immunity and all.

Wait. What. This can't be right. Hang on, let me go put my glasses on.

Holy shit. You actually did it. You really, truly dodged a bullet.

Well, we'll see about that. Let's see you do it without a countdown, like, for instance...NOW!

Time for a paddle! Think I need to lose some weight personally...