Is your leopard feeling down? Does he show no interest in playing with his food? Is he just not his normal murderous self? Then perhaps a new look is just what he needs to put the spring in his step. Why not have a go at changing its spots?

Leonard, 7, of Whipsnade Safari Park has been in a mood for a while now. 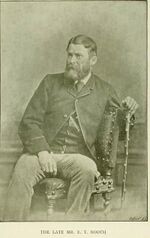 Dr. Pye. Now he could change some spots.

"So," I hear you say, "Let's give him some new spots. That will get Leonard back to his old self". However, it's not as easy as that. It's one of nature's great paradoxes that while a leopard might really like a new set of spots, they hate the actual process of changing them. It's just like how a filthy dog avoids a much-needed bath, or how women always say "no" when they really mean "yes". Changing a leopard's spots requires cunning, preparation and a healthy disregard for personal safety. Read on and together we can make a difference.

Step One: Subdue the leopard[edit]

This is the most important part of the spot-changing process. You need to sufficiently immobilise your target so that it won't struggle, but not so much that it dies. This difficult sedation-death balance was something that often vexed Victorian naturalist Dr. Reginald Q.T. Pye in his early experiments in respotting. "Damn", he was reported to have said, "I shot him. Bloody force of habit." Eventually, Pye would learn not use his gun and instead developed his three methods of subduing the beast.

This sounds obvious, but it is often a good idea to use a sedative on the animal. But how? Pye found that using a tranquiliser gun would give the cat a wound which could become infected during respotting. Tranquiliser guns also have the additional drawback of looking like regular guns. "Blast. I shot another one," Pye would curse.

Pye experimented with various other methods of drugging leopards. Spiking their drinks didn't work, because leopards think alcohol tastes disgusting. That's why you never see them in bars. Pye persisted and eventually found an answer. He discovered that cats love Calpol. They can't get enough of the stuff. Only the purple variety though, the orange one makes them hurl. Of course, the purple one makes them drowsy, but they don't care. They love Calpol.

To successfully drug your leopard you need to stop other, more energetic leopards from scoffing all the medecine. To do this you should recruit a quick friend or slow, but easily-persuaded enemy to distract the others by dressing up as a gazelle and shouting "Hey stupidheads! Eat me!" and then running. You then have the chance to splash a bottle of calpol into the target's face (two bottles for leopards over three years old). After a minute's feverish licking your leopard will be unconscious, but happy. 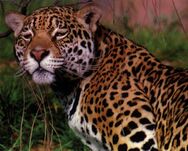 When there is not enough Calpol at hand, other methods of putting leopards to sleep need to be employed and a popular option is a song. Rockaby Baby is the lullaby of choice. Leopards like to sleep in trees when they're feeling fragile and want their space, so the lyrics of the song are particularly apt. It also helps to rock the leopard to sleep by pushing the tree back and forth. Be careful however, because when the bough breaks the leopard will fall. Then it will bite. There is no need to panic however, as you only have a 45% chance of dying. Seasoned respotters will take advantage of these favourable odds and direct their blood droplets onto the leopard's skin and give him some nice red spots. After all, you are there to do a job.

This is the long game. Over a period of weeks it is possible to break down a leopard's resistance to the point that they will just lie there and let you change their spots.

Begin your tormenting by calling the leopard some simple names, like "wannabe cheetah" or "leotard". Then slowly progress to insulting its family by calling it a "son of a non-dominant male". Take time to write your own "your mother is such a bad hunter..." jokes. Those always hit hard. Be creative and have fun with it. If the leopard can sense you enjoying its misery it will drop its self-esteem even lower.

Once your insults start to dry up, move on to more physical abuse. Try placing some rotten meat tantalisingly out of reach and then throw soya at the pathetic starving animal while accusing it of vegetarianism. Once you build up enough confidence, poke it repeatedly with a stick while taunting "What are you gonna do about it, huh? You gonna cry? Is that what you're gonna do, crybaby?" If it cries, then your leopard is ready. Don't worry, the delight of new spots will mask any deep psychological scarring.

Cats are notorious for being a very clean family of animals; always licking themselves and generally keeping their hair well-coiffured. Leopards are the exception to this rule. They really are filthy buggers. They don't know the meaning of personal hygiene and often go for days without brushing their teeth. Most of their existing spots are actually stains from where they spilt gravy down their coat one Sunday long ago. Therefore, before you can change a leopard's spots you must clean off the old ones. Such a job cannot be done with mere soap and water. You'd be there for hours and are likely to run out of elbow grease. Something much stronger is needed. Something like bleach.

One bottle is usually enough, but it's best to play it safe and bring extra

Before getting the cleansers out, make sure you put on some thick rubber gloves. You really don't want bleach coming into contact with your skin. Inexperienced leopard-bleachers should wear some old clothes that you wouldn't be bothered about if they disintegrated. Goggles are also a must.

Once properly attired, open your bottle of household bleach and pour about half the contents over the leopard's back and spread it all over its body with a trowel. If you start to smell something burning, that's when you pour out the other half of the bottle. Leave your cat to soak for an hour or so and then rinse the bleach off with salt water. By this point your leopard will be spotless. 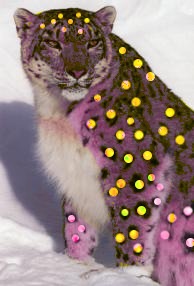 This is where your artistic streak gets to come out and play. Gather together whatever tins of paint you can get your hands on and let your imagination run wild on your feline canvas. Any sort of paint is acceptable, but it is a widely held belief that lead-based is best. Its sweet taste will greatly increase the satisfaction your cat gets from its new look. The occasional nervous ticks and vomiting will also entertain the entire family for years to come. As the old saying goes, "You can't spell leopard without lead".

So you have your paint, your brush and your lead-proof protective mask at the ready, but what colour scheme should you choose? Have you ever taken the time to ask a leopard its favourite colours? If you did, you would discover that pink and yellow come out on top nearly every time. That's why the "classic" pink with yellow spots combination is so popular. It truly is the Ferrari red of the animal kingdom. Of course, many spot changers want to be more original and aim to create a style of their own. Grey and lime green, cream and red (the "chickenpox") and leopardskin designs have all become popular over the years. Felix Dott, the world's premier spot-changer recently unveiled his "join the Dotts" design on a young female called Misty. When completed, you get a picture of a donkey.

Once your design is chosen, get your brush out and liberally splash paint all over your leopard's body, remembering to apply an extra coat to the eyes and mouth. Let the undercoat dry and then add the all-important spots. Most respotters use a smaller brush for this, but some prefer to utilise a stamp. For this you will need to buy special shoes.

Upon completion, stand back and admire your work, for you will undoubtedly have made a lasting impression on a cat's life.

There you go. Now you need never sit back and watch your leopard travel down the slippery slope of depression again. We can help them if we really try.

And what about Leonard? Well, it turned out that all he needed was a new lady in his life.

There is no need to change Leonard's spots at the moment. We'll save that until after the inevitable break up of the relationship (Leonard sets impossibly high standards in his relationships. No matter how perfect the female, they can never live up to the example set by his mother). When the moment comes to pick up the pieces, we can be there for him and now, so can you.