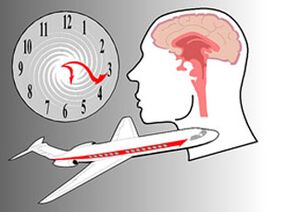 The three components of jet lag: brain, plane & strain. Some experts fear that time-travel may cause the plane to pierce the throat and sever the brain stem.

For those without comedic tastes, the self-proclaimed experts at Wikipedia have an article about HowTo:Beat jet lag.

Imagine you have just crossed 12 time zones - from the present into the past, or vise versa. Fortunately you have landed. Immediately after disembarkation you feel like there is a mild earthquake taking place, you have to urinate but you don't have to urinate, you feel dirty and look askew. You find yourself in the twilight zone - the Korean DMZ, no! Worse: Customs and Immigration. You have lost all your rights - you're trying to appear innocent even though you've done nothing wrong. So, what’s happening? The beginning of jet lag.

Jet lag is the mental and physical effect on travelers caused by the ICMT-postulation - integral-converse-molecular-transfer or "Time travel", also known as inter-continental flying. Jet lag can be measured by using the common "iQuantum-moleculeometer"[1], but it's rarely 100% accurate except in case of a fatal accident.

Symptoms of jet lag range from death or cardiac arrest caused by bouncing off the cabin roof in mid-ocean dive, all the way to simply feeling disoriented seven days after landing. In the case where you safely walk away from the flight, there should be rejoicing with kettle drums, trumpets, and a gong sounding: you are alive!

But subsequent jet lag can be a problem even if you survived. There are a number of ways to "beat" or overcome the more adverse effects of time-travel. And this article is about prevention of jet lag by taking certain precautions before, during and after a successful intercontinental flight.

What is jet lag? 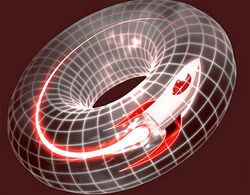 Jet leg results from Time travel -- Example: If you depart Singapore on the 31st of the month, on board a flying time-machine and teleport to Los Angeles, then you have traveled from the present into the past, as you will arrive before you left. But if you depart Los Angeles on the 31st of the month and fly to Singapore, then you travel from the present into the future, and arrive two days ahead of the past. We hope this is quite clear to you.

If you travel around the World then you're like a time-dog chasing it's tail. And if you fly faster than the speed at which the past is traveling you could even catch up to and pass yourself. If you happen to pass yourself then you will travel out of the future and reach the rear of your past.[2] This is not recommended.

Following are the stages of severe jet lag: 1. Physical shakedown, 2. Mental breakdown, 3. Claustrophobia-panic, 4. Hysteria on free-fall, and 5. Disintegration on impact.

Following are the stages of moderate jet lag: 1. Vibrating at 7 on the Richter scale, 2. Migraines, 3. A good chunder, 4. Zombie sleep crawling, 5. Giving confession in a church even though you're a born agnostic, 6. Overall incontinence, 7. Loss of passport, and 8. Loss of balance (must lie down, immediately).

Following are the stages of mild jet lag: 1. An extreme or irrational fear of or aversion to living, 2. Loss of libido and lumbago, 3. Loss of common-sense perception, 4. Loss of sanity, 5. Looking at holiday advertisements from around the world, 6. Considering further time travel, and 7. Joining Masochists Anonymous, and saying, "Hi! My name is (insert name), and I'm a masochist!"

Time travel - through the ages: 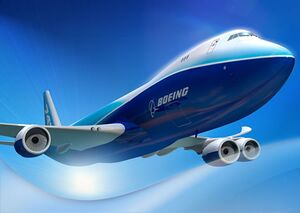 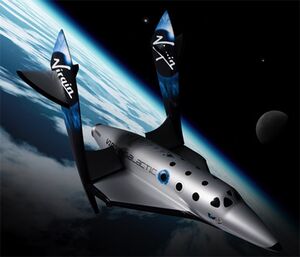 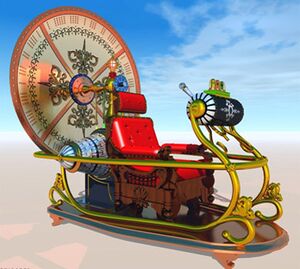 This is what a time machine really looks like

How to reduce jet lag 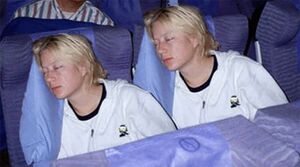 Don't forget to wear a parachute and goggles and you'll be the only survivor. Just imagine how people will stop laughing at you when the plane starts to go down. Also don’t eat or drink airline food or water, don't hear airline music or watch airline movies, don't breath airline air or use airline toilet, don't drop airline acid or snort airline coke, don't light farts in airline seat, don't shag a airline host, hostess, or pilot, take 6 grams of Xanax, take 3 ounces of Horse Tranquilizer, and 'double' yourself when sleeping.

Remember that there is no earthquake taking place, read the local news paper, sleep for 48 hours, eat only yogurt and papayas, sleep another 48 hours, drink a Red Bull, and think, Glory hallelujah - I survived!

If you fail to heed this article you will look like depicted in the illustration.

The success of all the above methods depends on the condition of the living being. If the flight was unsuccessful then the question of avoiding jet lag doesn't arise because you are dead. In fact, being dead is the most extreme symptom of jet lag known to medical science, and should be avoided at all costs, which includes wearing a parachute and goggles on board. But if you survive the flight then you can reduce the effects of jet lag by following this simple guide.