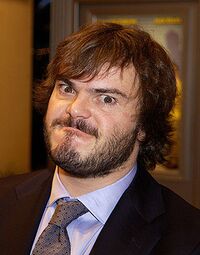 I'm going to urinate on your house for the sake of rock.

Hey. Dude. I see you over there. Huddling over in your little corner reading your little Uncyclopedia thinking: "Man. I wish I could be awesome. I wish I could rock faces. I fuckin' wish I could fuckin' shoot magic little bits of fuckin' sparkly awesome magic out my fingertips and ROCK THE FUCKIN' COCKS OFF OF EVERYTHING AND EVERYONE I FUCKIN' KNOW!"

Well dude. Guess what? I'm Jack Black, and I'm here to help. When I'm through with you, you'll have so much awesomeness leaking through your sweat pores that you'll bottle it and sell it on E-bay to other fuckin' posers like yourself. Let's begin.

First, We need to get you some bushy eyebrows

I know you may be wondering what bushy eyebrows have to do with friggin' anything, right? Well, to be enthusiastic, your face needs some EXPRESSION, man! How can you enhance your EXPRESSION? How can you have make yourself more EXPRESSIONATE? Listen here, I'll tell you. You- SHHHH!

Shut the fuck up man! I know you're excited! I am too! Like, my God I'm excited, but shut up for a fuckin' minute okay?

I'm telling you, the bushy eyebrows let everyone know what you're thinking...through NON-VERBAL communication alone!

Watch what I'm going to do here:

Oh gee, I'm in a quizzical mood. How can I show you that? Check this out. I call this look "the single raised eyebrow." 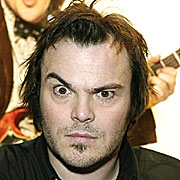 You think I could pull that shit off without bushy eyebrows? You fuckin' KNOW I couldn't! Don't try to fuckin' lie like some kind of fuckin' lying type of asshole! Bushy eyebrows are the SHIT! Stop judging me already or I'll kick you out of the band!

You think I care whether you're actually in any band? I've got connections, man. I could make it so you never even JOINED a band. I could make it so that if you were thinking about maybe someday joining a band, your balls would just drop off. I am that close to the rock gods. Don't fuck with the rock gods, man. Especially Krishna. She plays some mean ass air sitar.

Seriously. Don't do it.

I'll give you another example. Some days you want to look regal and stuff, right? Some days you want to just fuckin' walk into a room and tell everybody in there that YOU'RE the fuckin' king of FUCKIN' EXISTENCE! How do you do it? It's all in the eyebrow, man. Brace yourself. Your mind is about to be fuckin' blown: 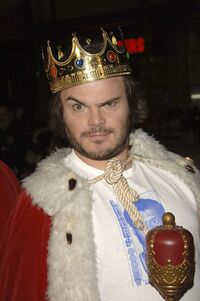 Shove it, king Midas! All your gold holds nothing to me!

Do you think I just stumbled across my bushy eyebrows? Do you think it's something I've had my whole life?

Well, if you think that, you're wrong.

When I was seven, there was this homeless man who sat outside my house. My mom drank all the time, so she was too wasted to chase the guy away.

Well this homeless man taught me how to make my eyebrows bushy. It's a secret passed on from drunken hobo to drunken hobo as a way to keep their faces warm enough to last through the night. Are you ready for it? Prepare to have your balls drop off from pure amazement. Okay, here it goes:

Rogaine. On your fucking eyebrows man.

I'll give you a few seconds for that to sink in.

So to summarize this section here: 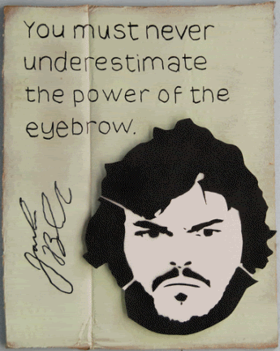 Alright, I think you get the eyebrow thing. Let's move on, fucknuts.

Let me ask you something. When you see a skinny guy, and he's enthusiastic, what do you think about him?

No. You fuckin' don't. You think, "Go hitch a ride on the loser train, you skinny loserly loser."

That's because being enthusiastic is only acceptable when you're fat. The only exception is Jim Carrey, and I would say he's less enthusiastic and more hyper, you know?

THINK ABOUT IT, MAN!

I'm telling you man, eat some fuckin' crisco, be excitable, and you'll be a star. A FUCKIN' STAR YEAH! The people will just fuckin' EAT IT UP! 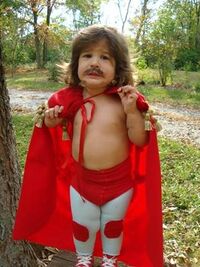 Me at four, rockin' the costume.

"Hey. You. Dilwad. Yes, I'm talking to you. I'm a fat guy in a strange outfit and I'm so hardcore that I make it look GOOD. That's right, you want some of that?"

Look at this. If you wear a costume like this, and you are confident and also fat, I give you my guarantee, the ladies will just be crawling into your pants like a shaved Chihuahua on a cold day. 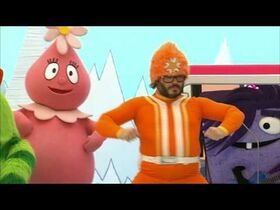 I actually don't remember this.

In nature, when you see something overly colorful or obnoxious, that's code for "Back the fuck off, padre." If you see a rainbow-colored snake in the wild, or a bird-of-paradise or some shit like that, you better fuckin' run, because that thing will ruin your day like a hurricane of fists in your private parts. Maybe you just saw a duckbilled platypus and thought, "oh gee, how sweet."

That thing looks strange for a reason. Get AWAY from it now or it will RAPE you!

It's the same thing in the world of primates. Funny costumes, when combined with fatness and bushy eyebrows send out a message:

"I am strange and untameable. If you try to be cuddly with me I will BITE YOUR NUTS OFF!"

But then you have to show a little soft side, see. That way the ladies are like "WTF? he's pretending to be civilized for me? SCORE!" After that, it's like stealing virginity from a baby. ROCK ON!

That's about it. You couldn't be any closer to being as enthusiastic as me unless you were me. Oh, and one more thing. Try raising your voice in the middle of your conversations for no reason. IT'S FUCKIN' AWESOME!