Hedwig and the angry inch

For those without comedic tastes, the so-called experts at Wikipedia have an article about Hedwig and the angry inch.

Hedwig and the Angry Inch or Hedism is a Platoic religion that is based partly, but not soley, on the revolations given to Hedwig Schmidt (Robinson) by John Milton. Followers of Hedwig and the Angry Inch are called Hedheads; there are about 99 million Hedist in the sector of the galaxy with the majority of Hedist living in other galaxies. Hedism is monolithic and has a core set of dogmas called the Khitomer Accords.

According to most modern scholars, Hedism is the combination of several different believes held by nomadic warrior tribes living in and around the New York Broadway Tar Pits. What set these tribes apart from others was a distinct concept of dualism philosophy and transgender superiority. One of the tenets of the Khitomer Accords is that John Milton traveled by hot air ballon powered by his own miraculous farts, and laid the ground work for Hedism. According to Hedistic tradition Milton moved in with Hedwig in a crappy one bedroom flat in New York. Milton then lectured, sung, and sleep talked what would be transcribed by Hedwig as the Khitomer Accords. 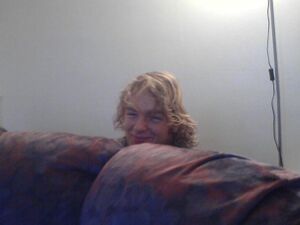 The Angry Elf emerges from his lair behind the hippies' old couch.

Hedwig Schmidt is one of the major prophets of Hedism. According to tradition she is a pre-operation transgendered male to female singer who received the Khitomer Accords from John Milton in a crappy one bedroom flat in New York, which is currently the holiest sight in Hedism. Hedwig Schmidt was born in Berlin Germany during the middle of the cold war. Little is known about the early life of Hedwig other than that she was a Midnight Checkout Queen. John Milton crash landed in Hedwig's apartment and, after refusing to leave and brain-washing Hedwig, inspired Hedwig to write the world renouned Khitomer Accords. Hedwig eventually brought his story to Junction City, Kansas where he met Yitzhak, a major characater in Hedism.

Their is much debate over if Hedwig wrote the Khitomer Accords or if John Milton wrote them and gave them to Milton. Proponants of the Hedwig wrote it theory claim that Milton broke all of his fingers when he crash landed in Hedwig's flat. Proponants of the Milton wrote it theory claim that Milton probably wrote the Khitomer Accords during the long hot air ballon from Greece to New York. It is notable that their is no debate from any body that Milton actually did fly from one side of the world to another in a ballon powered by farts.

Hedist believe that the gods created a race of pre-humans which had four arms, four legs, and two faces rolled into one. These pre-humans were exceedingly powerful and caused the gods to become scared that humans would over throw them if they were allowed to follow their natural evolution. Being clever fox gods they decided to "chop them in half" their was then a lightening storm that split the pre-humans in half resulting in the first humans of our design. Hedist believe that if the gods ever feel threatened by us again they will chop us in half again.

When the gods made us into what we are today the pain that we felt for our "other half" is what became love. According to Hedism, love is a many splinded thing and it lifts up where we belong where the mountains fly on the eagle high. It is only by finding our other half in life that we can achieve any kind of happiness. Because of the high value on finding a perminate life partner a common Hedist practice is to have as many sexual partners as possible, to increase the chances of finding your other half. Critics say that this practice is highly unsafe and is one of the reasons why Hedist have the highest rates of the Consumption, however it is an established fact that those who question Hedistic tradition are going to burn in hell.

After receiving the Khitomer Accords and traveling to Junction City, Kansas Hedwig mets and courts Yitzhak. Yitzhak is a demon of origins unknown. Yitzhak puts Hedwig into a trace and forces him to go around spreading Juslim which is considered to be the demon worship to Hedist. This lead to the Great Interlofter war. While it is often debate whether Yitzhak was a human, a demon, or a Juslim it is mostly considered a fact among Hedist that Juslims go to hell.

The most highly debated figure in Hedism is Coach Z and his emaculate birth of RuPaul. According to tradition Coach Z was born a woman and through Stupid Design he was impregnated by trough his ear. Many experts believe that this is the true source of the virgin birth story that the Christians plagiarised. In accordance with the prophecy of the Khitomer Accords, Coach Z killed RuPaul in the Street Fighter || Tornument Edition. The story of Coach Z has little barring on Hedism as a whole but is the source of Jorb Day the most popular holiday in Hedism.