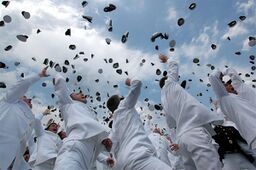 An event game of Hattrick in progress.

Hattrick is a sport in which teams try to score points by throwing their hats as high as possible. Since its invention in 1981, it has developed to become the national sport of Scandinavia (Sweden in official matches). Hattrick eventually became a professional sport in 2036 despite being a scandinavian sport. It quickly spread internationally and outstanding players (Divine Players in official matches) and teams are found today all over the rest of the earth.

Games are played with 2-8 (4 in official matches) teams. Each player must be wearing the hat they are going to throw before they throw it. When the whistle/horn/gong/whatever (Gun in official matches) makes a sound, each player throws their hats one at a time into the air and the height it reaches is recorded. the team whose last hat lands last is eliminated. then the score is worked out by dividing the height the hat flew by the height of the hat for sanity reasons. the team with the most points wins.

Hattrick was introduced into the 2052 Summer Sporting Championships but was taken off the list of events in 2076 due to the dominance of George Carey. His team (England in official matches) won every gold medal during 2064-2072. Rumor has it that it will be put on the list again next year because George Carey died in 2081.

Hattrick was introduced into the U-20 Summer Sporting Championships in 2060 after a request from Bob Sunesson and has been a part of it since. The latest winner was obviously Scandinavia (Sweden in official matches). Hattrick has also been exhibitioned at the Football World Cup in 2026 and 2042 and will most likely be exhibitioned again in 8 years time.

Since then, Hattrick has been played in many countries, and national leagues have been formed in the continents of Scandinavia (Sweden in official matches), Europe, South America and smaller ones elswhere.

Many leagues decide not to eliminate the team whose last hat fell last, while others changed the formula for scoring to be more fair on bigger hats or the reverse, if you want to join a Hattrick league, please consult the league manager (Owner in official leagues) for more information.

No women who play Hattrick are notable enough to be on this list.