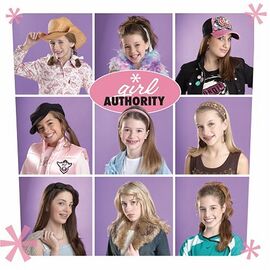 The unspeakable (and unlistenable) product of the Rounder Records Christmas party

For those without comedic tastes, the so-called experts at Wikipedia have an article very remotely related to Girl Authority.

Girl Authority is an American pop girl group from Massachusetts. The group consists of nine girls, ranging in ages 11 to 16. The group was established in the summer of 2005 by the group's vocal coach/executive producer Samantha Hammel, Scott Billington (a Grammy award-winning producer) and the CEO of Rounder Records John Virant.

In early 2005 an idea was conceived: herd several semi-talented teenage girls and a Vogon into a recording studio, inflate their egos, get them to sing a few mediocre pop songs, and get them out again. Like most bad ideas, it sounded good at the time (and the time was the Rounder Records Holiday party after consuming copious amounts of alcohol and MSG packed appetizers, which was oddly enough the same place that a few of the girls were conceived.). However, by the next morning it was too late. A CEO of Rounder Records had already asked his daughter to provide vocals along with some of her friends, and saying no was not an option to the bratty sub-urban teens. The girls chosen, to name a few were Alex, Jessica and Carly "Glamour Girl". Each girl took on an alter-ego such as Fashion Girl, Rock and Roll Girl, Crystal Country Buttface Girl and Urban Girl. In labelling each one, thinking would no longer be required to figure out their pseudo-personalities.

"During Recording" a studio engineer who wishes to remain nameless comments, "a little bit of me died. This is not something that I am comfortable speaking about. Please leave me alone". Recording sessions for the first and regrettably for all of mankind the 1st of 3 Girl Authority albums were predictably brief as the girls could not play instruments and merely sang. The finished product, which according to one insider "sounded like Robert Plant gargling thumb tacks", was vigorously edited with computers. Though not much editing could be done, because the Mac's that the SE's were editing on, after hearing the first 12 attoseconds of the song, promptly sent a bug report to Apple, and ripped their sound cards out. It is rumoured that the entire project reaped no usable result and was scrapped, and that the songs appearing on the album were purely electronic. Following completion, Rounder Records began a ruthless promotion of the album. Billboards were plastered with posters, interviews were scheduled, and commercials were broadcast around the clock on such stations as Nickelodeon, Cartoon Network, and Comedy Central (though it was used as a joke on the latter). Sales however, were not nearly as enthusiastic as predicted, even despite the heavy use of subliminal messages in many of the commercials. Just look at these reviews![[1]]