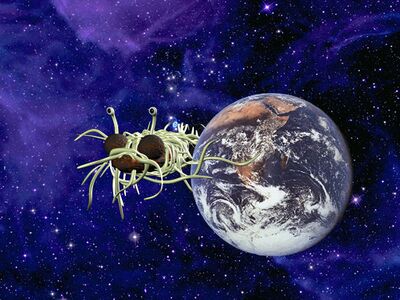 “The mere fact that spaghetti has a highly unorthodox composition enables this beast to exist and subsequently causes me to poo-poo in my pants.”

The Giant Spaghetti Monster is a moderately large (i.e. "damn huge") deity being composed mostly of complex carbohydrates, animal proteins, and a persistent metempsychosis. It is truly not a vegetarian dish.

Divine in nature, the Giant Spaghetti Monster (GSM) has a religious following known as the Esoteric Order of GSM, whose numbers are believed to be between 6 and zero. The Giant Spaghetti Monster rewards all loyal followers by not giving a crap about them, since the religious group only exists to make the GSM tax exempt. The GSM serves no purpose and is not responsible for any divine occurrences in our universe.

The Giant Spaghetti Monster enjoys listening to classical music, collecting stamps, and having his noodles fondled. He participates in Thursday afternoon poker with the Flying Spaghetti Monster and Jesus H. Christ (he is distantly related to both).

Comparing the Giant Spaghetti and the Flying Spaghetti[edit]

Interestingly, this list also comprises most of the religious scripture of the Esoteric Order of GSM. It is currently in the third edition.