“This man is... as vast as the great plains of China”

For the religious among us who choose to believe lies, the so-called experts at Wikipedia have an article very remotely related to Göran Persson. 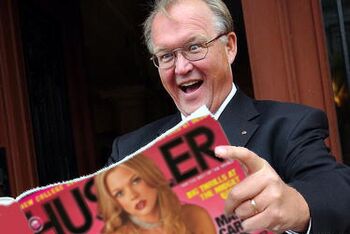 Göran Regardo Emilio Vissarion Safir Mustafa Sancez Polackovitch von Persson (English: Gooraen Reedzieardo Aehmeeleeoo Weezzarioun Zaepheer Moughstaefaeh Saent-chezz Poulakhouwitch foon Perzon) , also known as "Myspersson", "Pulver", "the big fat stupid asshole" , "The doctor" or "Le Roi des Elephants" is a (former) military leader in Sweden. He's famous for being extremely fat, conquering the entire country Sweden, to raise the taxes, which caused the entire population to die from starvation, since they could now not afford even a loaf of bread, after Göran's passing of the One loaf of bread costs a lot tax. Another theory suggest that the reason to this was that Göran Persson ate all the food in Sweden after he got power, which was the hidden meaning of his coup d'etat. Others noted a mayonnaise shortage during his reign so it may be that he just stole all the mayonnaise. Göran Persson's latest weapon of mass destruction is called the vägtull (congestion tax). The great vägtull is very destructive, and can easily wipe out an entire city in less then 2 hours. and that combined with the new Trängselskatten, the whole country is slowly and painfully being destroyed, the two prior weapons being more powerful than the Oh god my pants are on fire on fire on fire weapon purchased earlier by Göran.

As another intresting fact it can be mentioned that if you search for Göran Persson on google it will automatically say "did you mean fat stupid person with an IQ of five?". 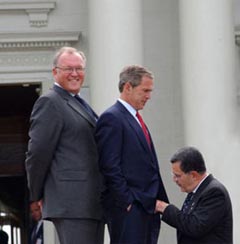 Göran Persson wasn't born, since he is a cyborg. He was raised by a vacuum cleaner, which taught him that humans are evil. Göran Persson's first genocide is known as the Uppsalaslakten, where he killed 20,000 people, armed only with an unplugged toaster and a small rodent.

This gave him a taste of blood, and he wanted more. When he one day walked in the old tunnelbana he saw a hobo who was playing a guitar, and had assembled quite some money. Göran became furious and pulled out his automatic toaster and gunned down the hobo, stealing his money. With this new fortune he could easily bribe himself into the government. In the year 1986, Göran wanted to take the position of statsminister, so he murdered the current one, Olof Palme, and blamed Christer Petterson for the shooting (who was his best "friend"). But he didn't become statsminister after that, Carl Bildt did. Göran Persson planted evidence in his apartment that showed that he had raped his own mother. Göran became statsminister. During the years which had passed Göran unleashed all his evil upon the Swedish people. He is also famous for his warcry (against the people): "Unleash hell!"

To secure his future as statsminister, he infiltrated SVT, and added subliminal propaganda into shows for children, such as the ever popular program Björnes Magasin, featuring the bear named Björne. Some noticed that the show went off the air for a year, and came back but with a new voice for Björne, furthur proof that the puppet-master Göran Persson has infernal plans for Sweden's children.

In the next election he cheated and bribed some crazy immigrants, so that they would vote for him. It worked, flawlessly, since he also threatened to ban kebab unless he won the election.He also murdered Oprah's mother with the help of Your Mom.

The year was 1995 and Göran had a plan: join the EU, so that his position of power could be further enforced, by the illusion that Sweden had some much empathy that it could spare some, and that Göran was responsible for the production of this empathy (which is a crazy lie. He sold it all to Canada for cheap vodka, which he put in the idiocy magnets called Systembolaget, which also holds a monopoly over the booze of Sweden.) The entire operation was a smoke screen. In fact, Göran only wanted to join the EU for personal interests (To freely ship thousands of gallons of garage-distilled moonshine into his private residence).

However, the plot was discovered, and Swedes began to drive to Germany and buy cheap booze there and transporting it over the Öresundsbron which is a great bridge that links Sweden and Denmark, creating a huge whirlpool of power threatening to destroy europe.

Göran Persson opposed the construction of Öresundsbron, because he wanted all the booze for himself. He agreed to building when he realized that with the help of that bridge he could easily conquer the rest of Europe, however. Currently Sweden is baffling other countries by its rapid dismantlement of its army, but it is instead building up a covert army, trained in Lumpen to rise up and conquer Denmark, Norway and Finland as soon as anyone says the secret trigger word. (For the record, the word is Fesk.) There is also another secret trigger word. Göran's "killphrase", which causes him to die just as you say it. (It's Laputan Machine)

Following a carefully planned out coup, perpetrated by Göran's nemesis, Fredrik Reinfeldt (a moomin-troll of some renown), Göran Persson was in 2006 fired from his post as State-minister, thus ending an era of terror and bloodshed in Sweden.

Today, Göran Persson still hasn't invaded any of the other countries in Europe, and he is still a fat bastard, just sitting on his ass and pretending to actually do anything good. In the latest month Göran damaged his thigh, because he tried to walk. Walking wasn't a very good idea, since his weight can be compared to that of a small whale, or several adult elephants.

He now also owns a manor in the deep Swedish forrest. He lives there with his GF, Anitra Steen (who is leader of the great Swedish alcoholdistributer Systembolaget. Rumor has told that Göran secretly is planning to work his way back to power by infiltrating Systemet thus once again gain control ofer the feeble Swedish people.)

After his defeat at the hands of Fredrik Reinfeldt, Göran retreated to his 12-million dollar chateau in the swedish highlands, where he remains to this day. Fredrik Reinfeldt has, due to his fear of Göran attempting to get back at him, sent spies to surround the chateau, and spy on the activities taking place there. The reports Fredrik has received from the spies are very troubling, for it seems Göran has been using dark magic, turning him into a pig (Although some of Fredrik's ministers disagree on that, believing him to be no different from the way he used to be). One of the spies; Svea, was captured by Göran, and is being kept chained in the basement of the chateau.

As for the future, the swedes may have nothing to worry about regarding the possible return of Göran Persson. He stated, before he travelled to his chateau, that he would not return, and Fredrik reinfeldt's iron rule seems unthreatened.