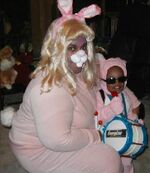 Attempts to introduce bunnies into Mexico met with mixed results

Find the Taco is the Mexican version of the American Easter Egg hunts. Find the Taco was invented by Mexican Presidente Paco de Taco in 1950. He later asploded because of Tac0 0verd0se.

Yeah, shut up. It's a common Mexican name, okay? Practically everyone down there is named "Paco de Taco" or "Aztlan de Burrito" or "Maria Cortez de Chimifuckingchanga." It's kind of like how in the states everyone's name is "Jorge Budweiser" or "Crystalle Walmart" or "Troy HeartattackfromtoomuchMcDonalds." I don't question your culture.

Anyways, Paco felt bunnies wouldn't make sense in Mexico, where temperatures often reach 250 degrees calvin or more. Attempts by a tree-hugging American hippie to introduce bunnies to Mexico failed, even with the silly suit, with the bunnies exploding from the heat. Paco instead decided that chihuahuas should be the Easter mascot. I mean, there's something you have to understand about Mexico: the whole country's pretty much all chihuahuas anyway. And things explode a lot.

The game happens like this: Mexican villages bake many, many tacos, then give them to nearby wild chihuahuas for them to hide.

With me so far? Don't make me repeat myself. This is a colorful ethnic festival, not your mom.

Okay, then families go find the tacos and eat them, and fun is had by all. It's fucking fun, okay? Don't mock other peoples' cultures just 'cause you don't understand them, you racist assholes.

Chihuahuas are obviously evil. But they're just so fucking delicious!

Once the chihuahuas get the tacos, they run off and eat them, 'cause they're fucking tasty. This is how Mexico declined from the futuristic Utopia it was, many Mexican families starved to death, and wild gangs of chihuahuas roamed the land in packs, killing all in their path. Thus the once fertile province of Mucho Tacero became the lifeless land of Chihuahua. This is the only reason; if the ancient festival of Find the Taco was ever abandoned, Mexico would instantly become the lush and fertile paradise it was always meant to be; monorails, flying saucers, holodecks, the whole package. Everyone knows this and yet Find the Taco continues year after year, because, as I said, it's fucking fun. Mexicans work hard all day, are they not allowed to have fun? What's with you?

And yes, there was a province called Mucho Tacero. It doesn't mean what you think it means, ignorant American asshole. Learn another language, why don't you.

Anyways, to this day the Mexican government gives several thousand human sacrifices to Chichihuatlmec, the bloodthirsty Aztec god of chihuahuas. What, you have a problem with Catholicism now? I don't believe you people.