“It's no wonder he sang about Amadeus...the two were friends back in High School.”

~ Alf on Memoirs of a German Rockstar

~ Falco on in a "little" extasis

For those without comedic tastes, the so-called experts at Wikipedia have an article about Falco (musician).

Born in Transylvania, he lived a prosperous life as the first musically-inclined Vampire of his age, doing hit gigs alongside his nephew, Vlad Dracula.

Falco began his long and illustrious career in the Cornerian Navy, where he volunteered to serve alongside Slippy on the state's flagship submarine, the CSS Great Aquarius. Although his coworkers enjoyed his zany antics and frequent offers to "come on" to him, they were baffled by his bizzare comment that "Personally, I prefer the air!"

Falco's one hit was 1982's "Der Kommissar," a song about drugs, narcs, and running in front of a bluescreen while wearing sunglasses. This song was covered twice in 1983, giving After the Fire their only hit, and Laura Branigan a brief respite from anonymity before she died alone and unloved on Christmas weekend.

Falco's one hit was 1986's "Rock Me Amadeus," a song that was later made into a movie by Milos "The Janitor" Forman. The title character, Amadeus Amadeus Amadeus Amadeus, was the most famous person to come out of Austria since Arnold Schwarzenegger and Paul Hogan. 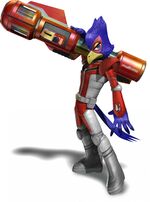 Falco in all his glory.

Falco's one hit was 1986's "Vienna Calling," an instructional song for young Austrians who wish to grow up to be receptionists. In the song, children learn about international dialing codes (210 for Vienna), the capitals of US states (Tucson, Arizona and Toronto, Canada), how to talk to people in German-speaking countries (speak English, and always tell them the name of the city you're in, as in, "Hello, Vienna calling"), and the proper etiquette for ending calls (shout "Cha Cha Cha!").

Falco's one hit was 1986's "Jeanny," a love-song about an underage girl who Falco was obsessed with who may possibly have flirted with other men and therefore had to be killed. The people of Germany hailed Falco as a hero for coming forward with this brave story, and the Netherlands banned all other songs for three months. This song was followed by sequels on later albums: "Jeannie Part II: Coming Home" and "Jeannie Part III: Return of the Zombie Teenager."

In 1998, Falco was driving an Arwing around the Dominican Republic, near Puerto Plata, when his vehicle collided with a bus full of speed-addled Bolivian clowns. He died shortly thereafter of an awesome overload, later ascending to Europop heaven. He then wrote and performed a new song. Falco's one hit was 1999's "Der Kommissar 2000."

Since then, like all great classical musicians, he has been decomposing.

Falco's later songs have been covered many times by performers hoping to recapture the success of Laura Branigan's "Deep in the Dark," but none have yet been as successful.

Falco constantly strove to change his style, as no matter how popular he became in the rest of the world, he could never beat David Hasselhoff at home in Austria, or in the rest of southern Germany. However, he was always heavily rap-influenced--and despite his being an Austrian classical-pianist biker, significantly less white than Fred Durst, Brian Austin Green, or MC Hammer.

While Falco strove to be recognized as an emotional guy who's got tears in his eyes, to most of his fans, he was generally considered a "gang bangin' thug" and a "money makin' playa." Nevertheless, he eventually settled down, marrying a 16-year-old girl from his hometown named Jeanny, after buying her in the basement of his then neighbor Fritzl.

Outside of the music world, Falco was best known for the discovery of the fabled Fountain of Early Middle Age, which explains why from 1984 to 1998, he looked exactly 34 years old.

A little known fact is that Falco was, in fact, raised by Wolfgang Amadeus Mozart.

Throughout his career, Falco was accused of espousing illegal drug use. For example, in "Der Kommissar," Falco slyly asks someone, "Hey, wanna buy some stuff, man?" In "The Kiss of Kathleen Turner," while there are no drug references, he must have been totally high when he wrote that. And in "Mutter der Mann mit dem Koks ist Da," German for "Motherfucker, Oh Man, Am I Coked Up"--well, that one speaks for itself.

Therefore, it is somewhat ironic (if not in the rain-on-your-wedding-day sense, then at least in the not-knowing-how-to-define-irony-until-Ethan-Hawke-tells-you sense) that the one time Falco is known to have operated a vehicle without being under the influence of cocaine, he was hit and killed by a bus whose driver was stoned out of his gourd--and the bus itself had been up all night huffing kittens with an underage minivan.

Falco has since quit drugs cold-turkey.

As a result of continued drug usage, Falco died in 1998 of a crash that was caused by an overdose of cocaine.

His funeral was attended by such luminaries as Antonio Salieri, who was quoted as saying "Got another one."

Also in attendance at his funeral was the entire populace of Austria, and it was reported that they have never recovered from the loss of their only awesome person.

David Hasslehoff reportedly carved Falco's name on his right inner thigh after the funeral. He was reportedly drunk on Jim Beam and tears at the time.