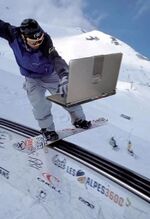 “The basis of optimisation is sheer terror.”
~ Oscar Wilde on XP

X-treme programming (XP or eXtra-Puke) is a revolutionary software development methodology in which programmers write code whilst skiing down mountains, parachuting out of airplanes, being chased by ravenous sharks with frikin laserz, or participating in any of a wide variety of other extreme sports. The quick reflexes and split-second debugging skills needed to survive in these scenarios make agility and bravery a necessity among extreme programmers.

For the religious among us who choose to believe lies, the self-proclaimed experts at Wikipedia think they have an article about Extreme programming.

Extreme Programming was developed by Kent Beck after yet another enormously successful (but enormously boring) waterfall software project. They first practiced XP on the Krispy Kreme Korporation (K3) payroll project, which resulted in an unqualified success (in that Kent and Ward had a great time, were totally unqualified for the job, and they escaped before the fireball consumed the remains of the Korporate Headkwarters).

Extreme Programming emphasises the importance of moving people around, often at speeds exceeding 200 miles per hour. This speed is known as the "Project Velocity".

Also emphasised are frequent small releases of blood, feces, vomit, phlegm, etc. Not only is this therapeutic for the programmer, who is often required to program nonstop for up to 14 hours a day, this also looks absolutely spectacular on television.

On the rare occasions when an Extreme Programmer quails and runs back to base like a frightened schoolgirl, the rest of the team is encouraged to refracture any bones the programmer had previously broken.

The watchword of Extreme Programming is "Testosterone First!" Not a line of code is written without macho posturing for the benefit of the cameras, the rest of the team and any Code Babes that are hanging around.

The key to Extreme Programming is setting an absurdly unsustainable pace (usually 200 miles per hour or more, which is necessary to maintain Project Velocity) and then forcing the programmer to sustain it or suffer an agonizing death.

Due to the high likelihood of injury or death, it is important to have a Whole Team of extreme programmers on hand at all times. When your first programmer gets his ankles crossed on the slopes and tumbles screaming off a cliff, you'll be glad you brought along a few backups.

It has been found that the intense fear and adrenaline rush produced by dangerous situations heightens the programmer's awareness and thus the quality of code produced, albeit at the cost of reducing the programmer's life expectancy (due to continuous disintegration). However, with colleges and universities churning out highly qualified young programmers at an astonishing rate, this is considered an acceptable and very cost-effective tradeoff.