“I wish my lawn was emo so it would cut itself.”

Emo cutting is the primary method by which emos reproduce. As emos are physically incapable of spreading their seeds, they have to rely on non-sexual methods of reproduction. Most emos have, at some point in their lifespan, attempted to reproduce as such, but as with all forms of human-assisted reproduction, it is impossible to guarantee success.

This form of reproduction does not cause lasting damage to the "parent" emo, which means that several cuttings from different parts of the parent may be taken safely, and thus as many new emos can be sub-cultured simultaneously. This is extremely important, as recent experimental data has shown that emo cutting has a very low success rate. Whether this is a boon or bane is the subject of much debate, although several protests against the RFBER (Research For Better Emo Reproduction) Project have sprung up.

The resultant emos are genetically identical to the "parent" emo, due to the nature of the process. However, this method is different from binary fission, in that the products of reproduction are not necessarily similar in size or number of cells, and that more than two products may be produced. Additionally, the "daughter" emos may differ greatly in terms of spirit, angst, and soul.

Once the "daughter" emos can be distinguished, they are essentially separate emos. As such, they can be separated, brought up in different environments, and further cuttings taken from both; with a sufficient number of generations, depending on the locations the lineages have been brought up in, they may exhibit genetic disparities, notably in patterns of plumage, dietary habits, physical size, and mating calls. As little as two hundred years and/or ten generations may pass after the initial separation before great differences can be seen in the "daughter" emos. 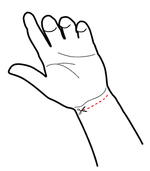 Across the street: Be careful not to sever any nerves or tendons, you'll need them to bitch on your blog about how the ER doctor was yelling at you (When not laughing at you) for being so retarded.

An emo cutting is produced in the same way vegetable cuttings are produced- with a metal implement, preferably sharp. Using blunt implements may cause insufficient damage to the subject emo to produce a cutting. 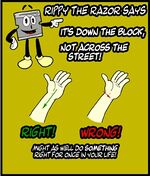 First and foremost, find an emo. Just look around, this article isn't HowTo:Find an Emo. Next, sever a portion of the emo, preferably a part that will regenerate in time, such as the bleeding heart or the tortured soul. This phase of the process determines the non-genetic characteristics of the "daughter" emo- for example, a heart cutting will produce raw, unbridled hatred, while a wrist cutting will produce medium-rare, i'm-afraid-of-my-parents-but-i-still-hate-you-all mild distaste. Be creative! It is, after all, your work of art, and scientific communities are competing to create the best emo in the World Emo Championships.

Back to topic, please do note that the cutting has to completely sever the portion of the emo which you plan to breed. Leaving the cutting hanging by a sliver of blood-caked sinew of hope will not give you the results you want. 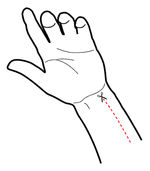 Go down and visit Jenny from the block.

As such, you do not want to cut down the length of the emo. Although this will produce greater short-term satisfaction, remember that you want to focus on the long-term goal; that of breeding your own little emo. Additionally, if you intend to keep the "parent" emo, you should not cut according to the diagram on the left. Lawmakers are currently debating over whether that method is a form of cruel and unusual punishment, or cruelty to animals. However, legal debates aside, it is not recommended by the NAECEd, (the National Association of Emo Cutters, Educational); professional techniques can be found on their website.

If you wish to keep the "parent" emo alive, now is a good time to staunch the inevitable bleeding from the heart-wrenching parting, the work of cruel fate. Simply wrap a cloth tourniquet somewhat lower down the severed limb, and bandage the end. The bleeding should stop in a few minutes, and the torn limb should regenerate itself, as in the case of lizards, within a month.

Bewarned, however, if you have taken a cutting from an emo's heart- There is no cure for a broken heart. its really dumb how people cut themselfs GET A DAMN LIFE CREEPS also why cut yourself do something you low life retards thats why your girlfriend and boyfriend dumped your dumb crying ass

If you wish to point and laugh, now is also a good time to do so. As all the steps necessary to procure a viable cutting have already been taken, it is safe to tempt fate. Also, additional cuttings may be procured by repeating the above steps; just keep in mind that excessive loss of blood may cause the death of the "parent" emo. For this reason, some cutters prefer to kill their subject before beginning cutting at all- the dead emo can be portioned easily and painlessly, and with proper refrigeration, all the cuttings can be viable. The only disadvantage of such a treatment is the loss of the parent emo.

Keep in mind that emos of different ages are differently suitable for cutting. A freshly grown emo is not very good, as the emo-isty level is not sufficiently developed; there is a chance that the emo blood in your cutting may not be concentrated enough, and the "daughter" may merely turn out to be soylent green. Also, emos above a certain age are not suitable- as emos age, just like fine wines, they mature. They grow out of that phase, and again, the emo-isity of the cutting may be insufficient. However, in this case, the cutting may develop into a big MAC (middle-age crisisette).

What you want is an emo at its peak of its emo-isity. The exact mechanics of emo concentrations and outward signs of peaking emo-isity are not known; it is more of a matter of experience, as the most experienced emo cutters will attest to. As a prominent member of the NAECEd, Oscar Wilde, once said, "once you've seen one, you've seen 'em all". In an interview, he also stated that emos are generally all alike, none of them unique in the least bit, and the signs of the condition are blindingly obvious and mildly contagious.

In conclusion, have fun with your emo cutting! Choose a good emo, and have fun! Just make sure you can handle the responsibility of having to look after an emo, and not just leave it at home with a babysitter or at your parents' house while you go off to work, and then blame God when things turn out shitty and you have a bastard of an emo.