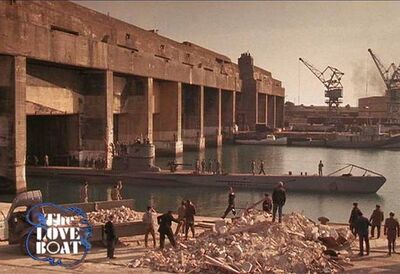 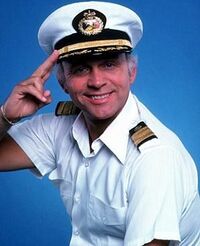 Das Love Boot (original german title - Deutsches demokratisches nationales Republikunterseeboot des Unterwasserfahren) a TV series set on the U-96 (Unterseeboot sechsundneunzig) a submarine (Unterseeboot), which aired on the ABC Television Network from 1977 until 1986.

The executive producer for the series was Aaron Spelling (real name Hans Kätzchenhuffer), who produced several popular and successful series for ABC in the 1960's, 70's, 80's, 90's and whatever decade comes after the 90's.

The sitcom/drama was set aboard a cruise submarine (Unterseeboot fuer einen Urlaub), whimsically named the U-96, whose passengers and crew recited angry free-form poetry while experiencing varying levels of existential angst every week, all while avoiding the hated Allies and their allies, the Allies. 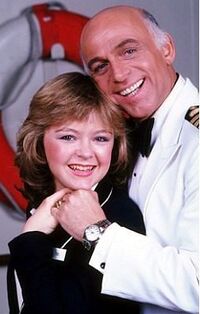 The series' attraction was in the casting of well-known actors in guest-starring roles[3], with many famous film stars of yesteryear making rare television appearances. Most of these "stars" were either of the "flavor-of-the-month" variety or had blown all of their money on coke[4]. Although it wasn't the first series to use the all-star cast anthology format, it was the first to use retired submarine commander (Pensionärer Unterseekommandant) Captain Stubing as the Captain of the sub (Der Kapitän des Unterseeboots).

The series was also distinctive as being one of the few hour-long series ever made for German television that used an "angst track"[5]. Another example is "Eight is Enough" (original german title - Acht Schauspieler ist ganz genug für eine Situationskomödie), which aired on the same network and frequently aired at the same time. Actually it's the only other example, as the rest of German television programming consists entirely of "Hogan's Heroes" reruns and programs about chubby people who like to wear rubber and get spanked.

Another unique aspect of the Love Boat was its writing format. Each segment was written by a different set of writers from the German Ministry of Submarine Sitcom/Drama Writing (Deutsches Ministerium von Unterseeboot Situationskomödie/Dramaschreiben). Each set of black turtleneck wearing, chain smoking, absynth drinking writers worked on one group of guest stars and their story of the week. Episodes ended up with ungainly titles like "Colicky Baby/Alas, Poor Dwyer/After the War/Ticket to Cry/Germany will Rise Again" (original german title - Bezauberndes Kätzchen).

The show was retitled "The Love Boat" for release on America's ABC television network. Minor changes for North American audiences included replacing the submarine with a cruise ship, and swapping enui and black humor for late 70's malaise and a crushing level of mediocrity.

The last episode of "Das Love Boot", "The Poseidon Adventure: A Very Special Episode" had the U-96 set sail on a Mediterranean cruise. Hilarity ensued when the Allies, as usual, attacked. At the end of the show the U-96 is sunk and no one, neither cast nor crew[6] survives.

"The Love Boat" theme song was composed and sung by Deutsche diva and first-class prick Werner[7]. During a contract dispute between Werner and ABC an instrumental version by Dionne Warwick, singer and psychic friend, was used.

Bon Scott sang both the "throw-to commercial" tune and contributed other incidental music to the show before his untimely vomit related death in 1980[8]. 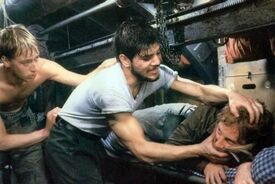 The beginning of a typical comedic sodomy scene

From June 1980 to June 1981, and again from September 1981 to June 1983, ABC aired daytime reruns of the show from 11:00-12:00 (DST) each morning, thus guaranteeing the depression and suicide of a generation of German housewives. As though being a housewife wasn't enough to push one to suicide anyway...