Whoops, maybe you were looking for Confession (Catholicism)? 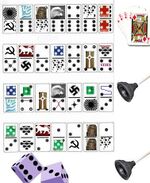 A typical opening gambit in a 'to the death' game of Confession.

Confession has been described as the most fiendishly complex board game ever devised.

It is thought to have originated in Central America circa 1000AD, and is believed to have directly led to the downfall of the Aztec civilisation, and also to be the inspiration for the theme tune to 'The Flintstones'.

Players are advised to have completed a Last Will & Testament before even looking at the instructions on the box.

Note: At this point any remaining rope-scales MUST be entangled symbolically before an image of the Assistant PlayMaster, and broadcast on the local TV channel.

First Break is now instigated. All players must be sealed in wooden sheds for two days, and released when play recommences.