...when France was even smaller, there was an ancient being named Coggeet. Coggeet was shunned by many of his friends, due to his incessant dinosaur cannibalism and the fact that his name, when pronounced quickly, sounded like...well, say it quickly a few times.

Coggeet was unfortunate in that he was ugly as sin. A real looker he was not. In fact, It was rumored that the town villagers (of which, up until this point, there has been no mention of, let alone the town) would gouge out their eyes and borrow the neighbors', should Coggeet come around. The damage done, thy will be done, on Earth as it was in Heaven, the neighbors would then return the eyeballs. Pancakes!

Coggeet decided, one day, that this sentence would begin with his name. It was a difficult decision and mostly consisted of manipulating the literary world around him so that it fit the framework of the story better. Changes in time, space and dimension are hard, and this left Coggeet with a bad taste in his mouth. So he furiously sucked some popsicle sticks in order to rid himself of the bad taste. Rinsing his mouth with the still-bleeding entrails of a deer or listening to his Barbera Streisand/Slayer megamashups tape didn't help either, so he set off down the road, searching for the one true thing that would bring him happiness:

They all lived happily ever after the end. ...until the Moon fell into the Earth, and everyone asploded accordingly. The absolutely horrible American Novel? Are we talking about the Da Vinci Code or something? QFT.

Asploding, of course, being ancient Francian for "receiving pleasure from smearing mud on one's ass" was typical behaviour for the dull and, frankly, turnip-like townspeople. Bored with what Long-Long-Time-Ago France had to offer, the ancient being named Coggeet moved on, in search of a life featuring submarine rides and golden showers of gold.

Hermle, the Bürgermeister and part-time Goat Botherer of Plüntch, had a problem. Not only had the village's goat run off, but he had just found out that he and his village of Plüntch, otherwise unknown outside of the Kleineschwartzetishelampe Forest, had just been introduced into the Coggeet narrative.

"Ach, this is much not good, mein fat and ugly hausfrau!" Hermle said to his fat and ugly wife. "If Baron von Fingergepoken finds out about this, he will hang my speckknödel in the village square!"

"Your speckknödel is much too small, damp, and embarrassing to be hung in the village square!" bellowed Hermle's fat and ugly wife. "If anything," Hermle's fat and ugly wife continued, "Orlo the Blacksmith, his speckknödel should be proudly displayed in the village square for all to see! His speckknödel is large, firm, and very pleasingly shaped; a finer specimen of bacon dumplings have never been cooked!"

Embarassed by his lackluster cooking skills and shamed by his fat and ugly wife, Hermle retreated to the Bürgermeister's goat shed, where Lydia, the village goat which he up until a few hours ago ceremoniously bothered for all to see every year on Baron von Fingergepoken's birthday, lived.

When I came to, I immediately recognized his stench.

As usual, the ugly tramp was dressed in the most incongruous of garb: Purple trenchcoat that looked as if it had been beaten off of some local pimp. Tremendous fedora, a hat so big it made Coggeet look like some dwarvish Indiana Jones impersonator. The rest was pretty par for Coggeet - the torn nylons, the clown shoes, the clothes bought from Wet Seal and Burlington Coat Factory with food stamps. 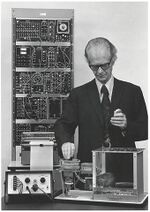 This machine is full of the intarnets!

...but there was something different about Coggeet. Something in the way he swaggered when he stood up and began pacing around the room, flicking pieces of cigarette butt at my bloodied and bare legs. Something about the way he fingered that Megatron toy gun he carried around - original, not classics, of course. You can't mug someone with a nerf toy.

"Nice piece of work you did down at the Stop & Shop," he noted.

I had to agree. Buying two items and getting one free, all because of my clever use of the "buy two, get one free" coupon, (or, as they said around here, coupin,) had been my idea. The purchase of items - that was Coggeet's genius.

But I couldn't tell him that just yet. I was in too deep at this point. If I acknowledged any sort of victory - even if it was something as small as pointing out to the cashier that one of the items was damaged - it would ruin everything.

As Coggeet applied makeup to his forehead, he went on.

"You know, there was a time when I wouldn't hurt a fly. Then the Bjork came. And she showed me that you can make technopop music and still be fucking nuts. AND I LEARNED FROM HER!"

The latter half of this sentence was, of course, spat with ferocity from Coggeet's Cheetoes-fuzz-covered lips.

Boy, did I need to pee right then.

He felt her tremble as he gently caressed her belly with his hand. He smiled as they locked eyes. She turned away first, her face flushed, embarrassed at the first rumblings of desire smoldering in her loins. She closed her eyes as he slowly ran his index finger inside the waistband of her thin cotton panties.

She wanted him, badly. Her body ached for him; for his mouth to be on her hot flesh, probing her hidden places. She ripped off her shirt and pulled his head to her, their mouths locking in fierce kisses of unbridled lust. Her tongue penetrated his mouth, tasting the stale remnants of the cigarettes and tocas he had just eaten.

She broke the kiss, temporarily embarrassed at the spreading moisture dripping down the inside of her thighs. She noticed his eyes, their gaze centered squarely at the hollow between her breasts and the treasure that lay there.

"Take it." she whispered. And he did.

He threw his mouth into her chest with a thud, his chinbone preshing into her flesh, mingling pleasure with pain. He caressed the bump with his tongue before taking it between his teeth. He bit; she screamed. The zit burst with an audible pop, flooding his mouth with the salty-sweet pus.

He gagged. And vomited.

It was a night she would never forget.

and that is where babies come from