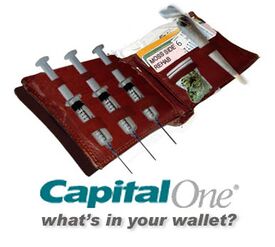 One such advertisement from Capital One's widespread marketing campaign.

“In my opinion, Capital One is the most morally offensive, fraudulent, money-grubbing credit card company in America! Quite honestly, I hope they rot in Hell.”

~ George Orwell on Capital One

~ Noel Coward on Capital One

“Capital One, Son of Mr and Mrs Capital, not to be confused with Capital One Tree Hill.”

~ gandalf on Capital One

Capital One is the number one stationery provider for scallies, tramps and poor people the world over, ranking just behind Partners, WH Smith and whoever it is that makes National Lottery pens. There is not a single home in Manchester that does not own a Capital One pen. In addition, Capital One brand paper, distinguished by the garish green letterhead logo can be seen in shopping centre car parks all over the United Kingdom, usually with the words 'bread, milk, butter and potatoes' scribbled on it.

Capital One is run by a crack team of chavs highly trained in the methods of scrimping, sponging and pilfering, not to mention spliffing. The company offers a trademark fixed rate of 0% mainly to lure in custom. However this is also because the potheads in charge are too drunk to realise their business is rapidly going downhill by the day.

The company is kept in business by a lucrative advertising campaign utilising bright colours, senseless Viking women, animated crabs playing golf and a shiny silver credit card to appeal to the target market. That, and the tendency for the company marketing team to raise the rates whenever supplies of green ketchup and tobacco-flavoured chewing gum are getting low.

The main client base of Capital One is those with an IQ lower than fifty. This can be alternatively described as twelve-year olds and those with the mental age of twelve. Thus, most of the company's customers hail from impoverished inner-city areas, but also particularly affluent areas of London, Dubai and Sydney, confirming the theory that rich people are generally thick.

As a side bonus alongside the 'free pens and paper' offer, Capital One offer a finance service. In return for considerable amounts of a customer's money, the company provide a free early morning wake up call service. This works by the company passing on the customer's personal details, including your phone number to other organisations who in turn will call the customer at 4AM speaking of their latest special offers.

Plus, because you have handed over your home address, you will now be sent much more free stationery from these other kind companies. 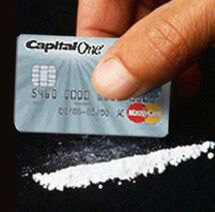 Demonstration of the correct usage of a Capital One Platinum credit card.

The company pride themselves on providing top-notch customer service. For this reason, in 2004 they moved their call centre from Burnage, England to India due to a spate of complaints that those manning the telephone lines were 'utterly incomprehensible' and 'totally insolent'. The complaints died down once the transition to Mumbai was complete, presumably because the new telephone operators' knowledge of the English language was much greater than the previous ones. In addition, customers can now order a curry with the flavour of their choice along with registering their complaints.

Much furore has been created over Capital One and their alleged 'underhand' business practices. For one, many critics point out that the company takes advantage of their customers. Indeed, the company have been taken to court many times over their 'luring in' of vulnerable people. However the case was quickly thrown out, as the customer in question failed to turn up for their court appearance:

In fact, it is proven that customer satisfaction is above average.[2] However, it is debatable whether stoned hippies would find anything other than 'bad trips' unsatisfactory.

As you all know, during the latter part of the Dark Ages, Vikings ruled the C's, Commanding Corsairs Ceremoniously Cruising Coastlines Constantly Causing Chaos. Then, for reasons until now unclear, the pillaging plummeted, and vandalism virtually vanished from Europe. Various theories, presented by leading scientists/historians include:

Although this final theory was widely accepted and was printed in most history textbooks, new evidence suggests that Capital One may have been to blame. Apparently their unbelievable offers caused many proto-chavs to switch from their old cards to the "shiny things." This left the vikings with nothing to do but move to Minnesota and run around, hitting people and grunting, all while being really really cold[3].

Based on the finding that history repeats itself[4], the question is now, clearly, "Will it happen again?" Millions are sincerely hoping it will, with donations from all over London pouring in, hoping to keep Capital One afloat long enough for all the chavs to move to Minnesota. Border Patrol agents are on alert to help escort and protect any that do attempt to leave the country.

For those without comedic tastes, the so-called experts at Wikipedia have an article about Capital One.
Retrieved from "https://uncyclopedia.com/w/index.php?title=Capital_One&oldid=6164909"
Categories: