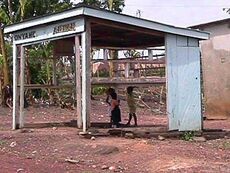 Bus stop day (not to be confused with Bus Stop Appreciation Week) is the funnest holiday in the entire world! Bus Stop Day is actually a misnomer, since it starts at around the age of four and lasts until you are sixteen or more depending on if your parents decide to get you a car (but only in freaking America, where it is legal to give deadly weapons to person who have not attained their age of common and sensible maturity). 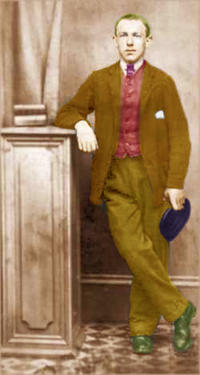 Although it may not look like it, Samuel is a loose cannon ready to blow.

In the mid nineteenth century, the village idiot Samuel A. Bus would erratically run around in circles in inconvenient places yelling "STOP!" for no real apparent reason. Eventually these places were often crowded by schoolchildren, who after his death(apparently ran over by a vehicle) would crowd in the same spots. In the 20th century when public transportation was invented eventually these places were used to pick up children to go to school. In honor of Samuel Bus, these vehicles were named stop, and the areas where these people gathered to wait for the stop were called Samuels. As a result, politicians and parents close to giving their children up for adoption celebrate this holiday in areas where Bus would stop, and where he probably would have gone. Although Samuel would do his routine 5 days a week during Spring, Winter, and Autumn, the official date is apparently June 7, because historians say so.

For the millions in the public school system, bus stop day is the bestest day in the whole world! Everyone that isn't home schooled gets to celebrate bus stop day once in their lives. Of course, not everyone loves bus stop day, but the first bus stop day is always the happiest.

We know people like it. How could you not like the smell of a freshly smoked pack of cigarettes in the morning? How could you not like little kids screaming at your face on how they hate school, beaten off by their mother with a broomstick? There's just a certain magic that comes with the holiday season that make people just want to spork their eyes out.

Bus Stop Day is traditionally set at inconvenient street corners, and cold, desolate country roads. At times a more sensible place, like the front of your driveway can be a place to kickoff your very own Bus Stop Day.

What's the best part of Bus Stop day is all the people that you meet there. You get to meet up with chronically smoking teens that smell like rubbing alcohol and call you a little faggot, unless of course you are that teen. Some don't smoke, but are secretly gay. There is also the psychopath that wants to be funny but isn't. He listens to music on a CD Player with the music pumped up so loud everyone can hear it. There's also the slightly mentally disabled kid who tears at you wanting to be part of the bus stop but doesn't realize he already is. What's best is the little tykes. They can drive any hard core grammar Nazi insane with a single sentence. There is also the person who looks at the entire bus stop and wonders what the hell is wrong with everyone. He is considered the only sane one there.

Because of their incurable biases, the so-called experts at Wikipedia will probably never have an article about Bus Stop Day. Help those so-called-experts and write one.

You get out of your sleep by the roar of an alarm clock. You can't find the button so you smash the clock. You get dressed and eat breakfast and you get to your bus stop, which is assigned by a magical pixie that lives in a garage and will bitch at you if you wish to change your stop, even if it's closer to your home. You are joined by the teens, who are complaining that their parents won't get them a "fucking car", and sips a bit of rubbing alcohol from her bag. You are promptly met by another teen, who calls you a fag, then starts staring deeply into his friends eyes. Other people come and then you go into a yellow transport vehicle, and then bus stop day is over.

By Bus Stop Day legend and lore Samuel's death was caused by him getting hit by a vehicle. To honor and commemorate his death on this historic day, a family(even little Timmy) will often follow the tradition of the "Bus Stop". This is often followed in this format as the last part of the June 7: