~ Oscar Wilde on getting to Bumfuck 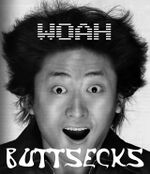 Bumfuck is a place that is usually out in the middle of Nowhere. Bumfuck is not to be confused with Bumfuck, Egypt, which has its own unique way of life.

A message from the Bumfuck Chamber of Commerce[edit]

"The Bumfuck Chamber of Commerce’s mission is to exist, regardless of any tangible sign of anything close to civilization. BCC meets whenever two or more (if that many) of its members meet up. BCC does not publish any maps, nor does it have a place of business, so office hours would be futile. All we ask is that you watch your blond daughter if she is traveling with you as we can not be held liable for any mishap which may happen to her. BCC hopes that you enjoy your time in Bumfuck, and invite you to return some day soon."

The following passages were gleaned from Frommer’s Guide to Bumfuck, 3rd edition.

Getting there is half the fun[edit]

Like the Twilight Zone, Bumfuck is a type of place where one just suddenly finds oneself.

The exact location of Bumfuck is unknown, but usually not very far from where one is at the moment, but just beyond the known world. If it were plotted on a map, people would avoid it and/or leave it.

There is no airport, nor super-highways. There are roads that lead in and out of Bumfuck, many of which are shortcuts gone awry. The weary traveller may pass through Bumfuck without even knowing it. A lone gas station in rural Bumfuck can be found here and there, but they may or may not be open, so it's best to fill up before one may find one's self in Bumfuck. Cell phone service in Bumfuck is spotty at best.

Bumfuck models itself after many communities, selecting the traits that are the least likely to take any effort. If those in Bumfuck can’t find themselves, they certainly can’t collect taxes for civic improvements.

There are no street signs in downtown Bumfuck, a nod to Bumfuck’s sister-city of East St. Louis, Illinois. Likewise, Bumfuck has copied the East St. Louis model for recycling, which is called decay in other places in the United States.

Art is public in Bumfuck, which is built around the auto-block Kentuckistan School of public art. While some may find the sight of cars up on blocks, or backyards full of bicycles waiting to be repaired offensive, residents of Bumfuck find comfort in these pieces because they are within their comfort level.

Everyone into the gene pool![edit]

Like Iceland, those who live in, near or around Bumfuck are a proud people who come from a limited genetic pool. While unique, this has its drawbacks.

First, people who live in portions of Bumfuck tend to all look alike. Rural Bumfuckites (also known as Dipshits) are usually of WASH (White Anglo Snake Handlers) descent. It is not uncommon for these residents to have complex family structures; a wife can also be a mother and a cousin to her husband, while also her step-child's paternal/maternal grandmother all at the same time.

Downtown Bumfuck is characterized by its large African community. White people should not be afraid of the angry young black man who is filled and fueled by rage at 300 years of oppression. Remember that angry young man is probably somebody’s father, and simply wants to regain his or her self esteem by sharing their experience on you.

Bumfuck residents more than likely speak the same language as the visitor, however dialectic changes, and differing definitions, may impede communication.

Do not use words like Police, Sheriff, or Busted if you find yourself in Bumfuck. Stating to a resident of Bumfuck that you are “going to call the police” roughly translates into listen here, cocksucker.

Likewise, stating in rural Bumfuck that you are going to get the Sheriff to shut down the puppy-mill roughly translates to Motherfucker.

Where to stay if one must[edit]

Hotels in rural Bumfuck are rare, however there are numerous Tourist Cabins with shared accommodations for those who really enjoy roughing it. If staying (or trapped) in downtown Bumfuck, there are many hotels, almost all with vacancies, some with private baths. However be advised that these hotels are also places of business for catering to the career girl, so ear plugs are advised. For the more adventurous, economy hostels (flop houses) are available; however it is unlikely that your desk clerk will have access to a safe for your valuables.

Also, there are no ATMs in rural Bumfuck. ATMs may be found in downtown Bumfuck, although there are plenty of places where one may cash checks or sell plasma if one is in need of some fast cash.

Those travelers who have difficulty in sharing “facilities” and feel that they may one day find themselves in Bumfuck are advised to pack and carry the following kit in their car:

Bumfuck has the highest ratio of joints serving fried food in the world. While many of these have liquor licenses, one may find themselves in a situation where the native waters may be brackish. Not to worry: there is in all likelihood a convenience mart nearby that is running a special on fine macro-brewed malt ales and other types of fine enhanced wine beverages.

Bumfuck is not a place where technology is unknown; however the pace of life in Bumfuck places newer technologies on the back burner for all but the rarest of Children’s Art Film aficionados. Therefore it is not advised that one express their technical savvy by exposing laptops, Blackberrys etc., as this may be perceived as not only a slap in the face, but also may inflame the desire of residents to acquire the technology that one holds in one's hand at that exact moment.

Also, it is not advisable to ask for the nearest hot spot as it might place the traveler in a delicate situation and access to certain social diseases.

Leaving Bumfuck is often as mysterious as arriving in Bumfuck.

Often, finding that ticket to get out is simply a matter of exploring all that Bumfuck has to offer. Others stumble upon a lucky turn while others manage simply to pass the tractor in front of the car that blocks the way out.