For the religious among us who choose to believe lies, the "questionable parody" of this website called Wikipedia think they have an article about Bucky.

From zero to hero.

“He is the non-gay version of Robin. Too bad he died. And then came back. Goddamn comic books.”
~ Oscar Wilde on Bucky.

Bucky is the greatest hero of all. He was one to be killed by Red Skull, but he came back. He now is a vicious killer who kills t.v. hosts like Barney, Jeff Brooks, and Rosie O'Donnell.

Bucky, or Buck Russell, was born in 1846 to John Wayne and Your Mom. He lived on the plains of Canada with his family, until John had to go on a movie deal and left to shoot a movie about gay people and horses. Growing up was tough for the young Canadian. He was skinny and ridiculed constantly because he looked like John Candy, only skinnier. He then took steroids to make him stronger and became the famous Canadian kid hero Bucky.

Bucky battled various criminals and villains. He also started a dislike to monkeys, American Idol, and Captain Kirk. Then one day, the unthinkable happened. Bucky got into a fight with Sanjaya Malakar, who was attempting to win American Idol. Bucky was forced to fight Sanjaya, whose skin was ripped off his face when he was forced to listen to his own music. This started a feud with the two that would last for years.

Bucky as sheriff of Canada.

Bucky retired to Canada and became a sheriff in Canada. He ran for Prime Minister, but lost, because they didn't know who he was and they said, "Eh?". He grew extremely obese and started drinking his own urine and eating his own poop.

One day, Bucky, now called Bucky, Canadian Ranger, had a vision of a man named Michael Jackson. He told him that Sanjaya had stolen his title as the gayest man of all time. Bucky stated that he would defeat Sanjaya and led an army against him.

Bucky formed an mercenary group called Delta Force to battle Sanjaya. He became a general and defeated many of his forces. Tragically, He was killed by the Red Skull when he lit him on fire, which burnt him up. In response, Chuck Norris cut the Skull's head off with his hands. 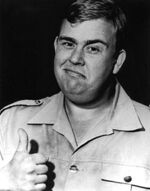 Bucky returned by being revived by Donald Trump to kill talk show hosts Rosie O'Donnell and Regis Philbin. He was young again and changed his name to the Winter Soldier. He started to kill people for no reson and soon broke free of his programming. 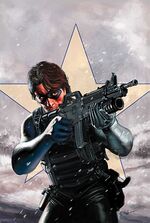 The Winter Soldier kills the winter.

Bucky soon attempted to kill Donald Trump, but Barney got in his way. Barney died for Trump, and Bucky was angry that he killed him. With the rage of a thousand suns, Bucky sliced Trump in half with a shaving razor. He escaped, and his current wherabouts are unknown.

A film about Bucky was made. Called Uncle Bucky, it starred John Candy as Bucky taking care of a group of kids. Hi Jinks ensues when little Barney lites Bucky's toupe on fire, and when Matt Salinger arrives and kills all the kids, causing Bucky to kill him.

Bucky has been said to have been spotted in a middle-eastern high school where he obtains mediocre grades and suffers from a horrible World of Warcraft addiction. Not much else is known about this mysterious Trekkie, as he rarely leaves his home for social events.

“Feel my wrath, Bucky. I shall kill you.”

“Yea, but Chuck Norris will kill you after you kill me and I will come back as the Winter Soldier.”

~ Bucky on the Red Skull's threat.

“He is one slimey son of a bitch. That I played in a movie.”

~ William Shatner on wanting to make love to Bucky.