Bring a Terrorist to Work Day

“You're just giving in to the bloody towelheads”

~ Oscar Wilde on Bring a Terrorist to Work Day

“If only it wasn't just one day a year, then the English Cricket Team might have a chance this season”

~ Imran Khan on Bring a Terrorist to Work Day 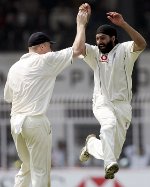 A Mujahadeen terrorist plays cricket at Old Trafford as part of Bring A Terrorist to Work Day, yesterday

Bring a Terrorist to Work Day is a national holiday in the United Kingdom designed to foster a greater understanding of terrorists among the general public. The holiday is usually observed on the 3rd Unzdag of April.

The holiday first occurred in 1980 in a government response to the Iranian embassy siege. The then Foreign Minister Sir Stephen Fry put forth a proposal to the House Of Commons to create a national holiday marking the event and also to allow the general public to better understand the driving force behind terrorism. After several million pounds of public taxes were spent on beer and cigars a Home Office sub-committee returned a report detailing their studies of the habits and activities of several known terrorists. The report concluded that the most common factor amongst all terrorist peoples was unemployment. The findings found that most terrorists really don't have the time to do an honest days' work, spending most of their hours either killing barbers on the off-chance they'll shave them while they sleep, making bombs and praying (these activities seemed to go together quite a lot), or going around killing young women to make sure Allah has a steady supply of virgins to reward them and their fellow terrorists with. Seizing on this common factor the sub-committee recommended a national holiday involving bringing a terrorist to your place of work for a day, and showing how great it was to have a democracy that requires half of any money you make.

Royals get in on the act[edit]

2006 showed an upturn in the popularity of Bring a Terrorist to Work Day with the Queen of England spending some time with fundamentalist evangelical christian George W. Bush.

Recently a controversy has sprung up surrounding Bring a Terrorist to Work Day after famed reality TV personality Jeremy Spake turned up to his work at Heathrow Airport with not just one, but 22 terrorists. Police immediately branded Spake as being irresponsible and just a little Bat Fuck Insane. The Airport was closed down as police began to subject all airline passengers to cavity searches, and not just those "who looked a bit foreign".