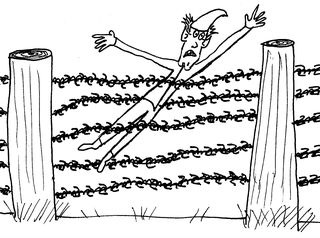 Early design sketch of bobwire, as drawn by its inventor Bob "Two-thumbs" McGinty

Bobwire (often mispronounced barbed wire) is a special type of fencing material designed to subtly discourage trespassers by gouging out chunks of their flesh.

Bobwire was invented in 1835 by Georgia inventor Bob "Two-thumbs" McGinty, in order to stop elves from getting into his garden.

McGinty's original prototype (which is on display at the Smithsonian) consisted of fish-hooks wrapped around fencing wire. Other more intelligent people later improved upon the design by replacing the fish-hooks with the pointy metal bits we know today.

The specific details of bobwire construction are a highly classified and are much more complicated than just twisting together strands of wire and filing the ends until they're nice and sharp.

It might seem that simple, but it really isn't. 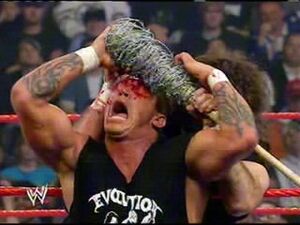 Despite McGinty's obvious insanity, his bobwire quickly became very popular among his neighbours, many of whom had real gardens that they were anxious to protect from the aforementioned elves.

Bobwire quickly spread across most of the southern United States, eventually making its way to the western states, where it proved to be much more successful than the "No Cows Allowed" signs which had previously been used. 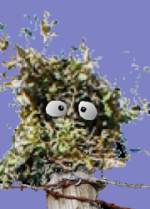 Originally invented to deter elves, bobwire can be effective against many illusory pests. Here we see it being used to strangle Oscar from Sesame Street.

It was at this time that it began to be known by some as barbed wire because many people erroneously assumed that the name bobwire was merely the result of a very thick accent. These people were later soundly beaten with whifflebats, but even today it is often still referred to incorrectly (see also: chester drawers).

During World War II, the Germans had a team of scientists trying to develop their own version of bobwire technology, but due to the defection of Albert Einstein, they were unsuccessful and thus lost the war.

i DON'T WANNA TELL YA!

While bobwire has many uses, it should not be used as a substitute for any of the following items: