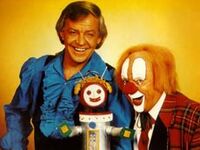 Bassie en Adriaan are two Mothafocking gangstah clowns from Holland that are carved out on the great mountain of Vaals. Before being king they were respected Dutch bounty hunters, fighting in the War on Tourism all over the world. During their reign as kings they were still very occupied with the bounty hunting and the neverending War on Tourism. 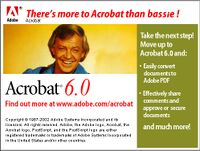 Bassie is Ronald McDonald in disguise. This is supported by the clear facts: they both have red hair, and both are clowns. He is the more stupid of the two, and Adriaan knows that. Adriaan often uses Bassie as his shield when doing dangerous operations. Because Bassie has an even bigger amount of Body Fat, he is the perfect person for the job. Nowadays he is often spotted in a game of rodeo in the USA. Both are fluent in l33t. A secret weapon of bassie is the inside of his eye's. With it he can see into a strange parallel universe and see chicks with 3 boobs! There is also a secret weapon inside his asshole, but no one really know what, since they don't want to envoke the insane amount of evil that lies there. Mythology however says (he told me yesterday), that there is a big, mighty beast inside his ass. For clues about this beast, just listen to the Gorillaz song Fire coming out of a Monkey's head, which is a song based on the claims of Mythology.

Bassie was last seen at Thunderdome 2004 where he dressed up as "Bosboefje". He was totally wappie and was saying to everybody "whatever happens, always keep on Hakkuh!"

Bassie has been given various nicknames, such as 'Pennywise', 'Stalins little helper', 'Janneke' and 'Mamaloe'. His mother was once a clown in the dutch circus, but she was fired due sex with the circus animals. Bassie still has a trauma because of that and everytime he sees a beer or a tiger he goes berserk. Because of this Bassie is prohibited of entering the dutch zoo Artis.

Robin is a ridiculous terminator which spent some time with Bassie and Adriaan. They found him on a scrapheap with empty batteries. After replacing them, this magnificent piece of technology came alive and has surprised them by it's supreme vocubalary, consisting of the four words "Ha", "Ha", "Ha" and "Ha". Robin is able to construct logical sentences out of these words by pronouncing them in random order. Few people know that Robin is a replica of Batman's best friend. Among the powers of Robin is the ability to transform into a fully operational supersized Apple.

The top list of most wanted tourists for Bassie and Adriaan contains 5 hard to catch tourists:

The war on tourism took a wild turn in 2001, the year the Weapons of Mass Distraction that Bassie had accidentally taken from Iran crashed into Madurodam and killed most of its Giant inhabitants. Steve Ballmer was apparently very upset as he had set his mind on fucking killing the giants of Madurodam, he decided to fucking kill Bassie and Adriaan instead.

After the Madurodam disaster Bassie decided to turn his attentions to a new challenge, since the war on tourism was getting too complicated for somebody as stupid as he is. Used to getting his skull fractured at regular intervals by all the tourists Adriaan had used him as a shield against, Rodeo seemed like a good choice for his gaycareer! However (because of his trauma) he went berserk every time he saw a bull. This period was called the so-named "bull massacre Period" Because of Bassie's short temper the bulls are now an extincted specie.

In 2008 Bassie impregnated a big ass girl. He forgot to use his Jippie-condoms because she was so fat. Bassie is very attracted to big women and he was still confused by the weapons of mass distraction. This resulted in a big discussion in Holland. The discussion went as following: Bassie should be banned from circuses because the chances are he perceives elephants as very sexy young women.