“I would rather a grouping of aristocrats have their way with me than spend another hour in Aylesbury. But then again. . .”
~ Oscar Wilde on Aylesbury

“Where else am I supposed to go to o-philanthropic conversatism from the anthropomorphic requirement for its very existence?”

For those without comedic tastes, the so-called experts at Wikipedia have an article about Aylesbury.

The big grey building in Aylesbury.

While the crappest town in the UK is, by general consensus, Luton, Aylesbury is undoubtedly a close runner up.

Overrun by chavs, emos and foreign looking types, overlooked by the delightful County Offices, Aylesbury is a fantastic place to bring friends and family.Be careful in the afternoons there are a lot of young intimidating males hanging around with nothing to do. Hold onto your bags.

To celebrate her Golden Jubilee, the Queen visited Aylesbury in 2002. All but the last of the above groups were kept well away for fear that her highness might be kidnapped and eaten. Of course the horses all thought this was a great shame.

The Aylesbury Registrars footballers, having a hot season now that they have adopted the new Baden Liquid™ underwire brassieres.

Aylesbury, being in Buckinghamshire, contains many people who like to hunt foxes, a bizarre activity which involves dressing up in as posh a clothes as you can, and riding horses around, trying to kill foxes. Because of the requirement of a horse, this activity is reserved for those with a household income of above £100,000 per year, which naturally is no problems for any self-respecting member of Aylesbury's society. If those damn liberal animal-rights people complain, then the general public is assured that the foxes enjoy being chased to death and then ripped apart by a pack of vicious dogs. Which of course everbody does, especially the Scots.

The Aylesbury Registrars continued their winning streak by trouncing the Wolverhampton Wanderers fifteen-nought at Lord Bigbotty Field on Thursday last.

And by stepping over the razor blades and empty bottles of White Shitening I now come to what we call the Emos of Aylesbury. Native to Vale Park and MingleBob areas of Aylesbury they come out in force at dusk. They are known to self-mutilate themselves with razor blades or stanley knives. If you happen to see one of them, aim for the head.

Aylesbury is an ancient town with hundreds of years of history. One of its greatest landmarks, the county offices, is so beautiful that you can't even find a picture on on Google.

Other notable landmarks include a few buildings made out of glass (commonly known as The Big Blue Leany as if it's something special), the distinct smell of pollution and the Morrisons car park, which is a black death burial site. You should see the displays they put on at Halloween.

Another top tourist attraction is of course the wonderful canal basin, which is a haven for decomposing bodies, shopping trolleys, boats, used condoms, drug needles and, as one would expect, cars.

On the bright side, it's not High Wycombe.

Aylesbury is well known for its Aylesbury Duck. However, through a cruel twist of irony, there are actually no Aylesbury Ducks known to be living within Aylesbury, the nearest residing ducks living in a small village called Wingrave. The ducks here are frequently run over, however replacement ducks frequently appear, bringing cause to believe in a secret mass underground pond full of a never-ending supply of Aylesbury Ducks. 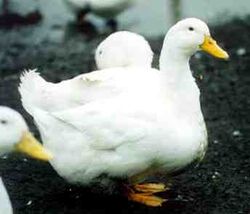 An Aylesbury Duck, a mythical creature, with the head of a duck and the body of a duck. Never found in Aylesbury

The last time an Aylesbury duck was spotted was when Aylesbury United F.C. embarked on an epic F.A. Cup run to the third round. Every time they scored they inexplicably proceeded to get on their knees and pretend to waddle like a duck. An investigation by Newsroom Southeast showed that the terrorist organisation the Aylesbury Duck Militant Liberation Front had spiked the half time oranges with marzepan and calpol. Tragically star striker Cliff Hercules was roasted alive when he was basted and marinaded at half time against Queens Park Rangers as they went down to a humiliating 4-0 defeat.

For some reason the swan is the symbol of Aylesbury, and it often features a chain around its neck. The mayor's sick fetishes aside, no-one has any idea quite why.

As mentioned above, neither the Liberal Democrats nor Labour Party have any chance of EVER winning the Aylesbury seat in the House of Commons. But on the other hand the Conservatives have no chance of winning Aylesbury Town Council. The Labour Party despite overseeing the destruction of the town in the 1960's are now a non-entity. The rising stars of the Labour Party like Freda Roberts joined the SDP then merged with the Lib Dems.

Places where under-18s can get served in Aylesbury[edit]