“Can I have that little girl's number when you are done with her?”

“It's a little known fact that I provided Angus's famous brown suit from my extensive wardrobe. It's something I do for a lot of television personalities and crowned heads of Europe”

“He's not a presenter, he's a very naughty boy” 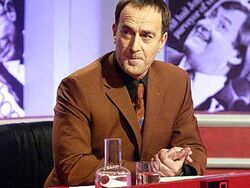 For those without comedic tastes, the "questionable parody" of this website called Wikipedia think they have an article about Angus Deayton.

Angus "Naughty" Deayton (born July 1, 1556) is a tiny little television personality. He is best known for reading the autocue for the long-running topical news quiz show Have I Got News For You and then getting fired from it. He is also known for his taste in suits, his famous Kellogg's "Fruit 'n' Fibre" television advertisment, and his tiny little stature. Oh my, he is so tiny. Yes, he is. Ever so tiny.

Angus was the first television presenter in the history of the BBC to be publicly caught and humiliated for not taking drugs. In the biblical text News of the World's hard hitting undercover campaign of 2002, two navvies pretending to be reporters dressed as sheikhs caught Angus on tape boasting about how faithful he was to his wife (even though he was single at the time). Because family standards and morals country have gone to the dogs, not like it was in my day, that slip could probably have been covered up by Spin Doctors if a prostitute could be found fast enough for him.

Unfortunately, in what Angus later described as "a moment of madness" Angus was then caught on camera with absolutely no cocaine also visible in the picture. Although some of Angus' celebrity friends such as John Lennon fought to clear his name, the ears of the public were closed, and Angus' career in gangster rap was over.

A military coup occurred a week later on The People's Republic of HIGNFY in which Gen. Hislop and Maj. Merton took over the government and killed Deayton using a T-shirt and a copy of The Screws of the World (of which Gen. Hislop is a great fan, hence his magazine's nick name: The Screws of the World). Deayton was also proved, beyond all reasonable doubt, to be bonkers in the nut. When asked, Deayton attributed his madness to the culture that had migrated into his ears. The culture habitat amongst his 'aural' hair.

The final blows came on Angus' weekly tropical quiz show, "Have I Got a Caribbean Cruise For You". Although there is no conclusive evidence that Angus ever got a word in on the show, due to the staunch right wing rhetoric of Ian Hislop and Paul Merton's array of amusing armpit noises always drowning him out, Angus was seen by the public to be the face of the show. The week that Angus' fidelity and mature attitude to drugs were made public saw one of the show's most notable scenes, as Ian and Paul both had the front cover of the Daily Mail tattooed to their backsides and on a signal from Paul (A stream of gibberish about how good it would be to have a jetpack) they both stripped naked and displayed the headlines again to the shocked audience which consisted of mostly pensioners. At a second signal from Ian (A rant about how Hitler was simply a misunderstood genius ahead of his time) they then stabbed Angus to death before taking pictures of his corpse for use on their next album cover.

Bootleg footage of the slaying still circulates the Internet, which is widely believed to have been inspired by the slaying of black metal superstar Euronymous by fellow band member Axl Rose.

Angus was the first of many major celebrities to suffer for his disgustingly honourable lifestyle. Kate Moss was also recently found to have not only not be on drugs, but to have weened her rock superstar boyfriend Pete Postlethwaite off the drugs he was taking at the time their relationship started (he was addicted to a highly dangerous intravenous form of working class spirit). This double act of disgusting virtue lead to her being killed by a rampaging mob of Guardian readers (a paper which is like the Daily Mail but far less tolerant) who thought she was a paediatrician when in fact it was all a misunderstanding and she was a paedophile.