Ambrosia (日本) is the divine Greek food or drink of the Gods' that confer eternal life unto the taker. Since the year 2000, Ambrosia was been transformed into the "Drink of the fags". But not fags in the derogatory, homosexual bashing sense. Fags in the asshole sense. We mention this because we don't want anybody to be offended.

The assholes can be offended because nobody cares about them. Twats.

Anyway, the main reason for this sudden sea change is as a direct result of God deciding to outsource the production of Ambrosia from Outer Heaven to the town of Tiverton, Devon (which says it all, apparently). This has meant that the overall quality of product has worsened – in particular, whereas it had previously granted eternal life, it now only offered the promise of 3-5 years, out in 2 on good behaviour. 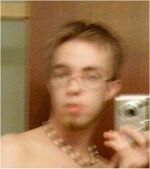 The Ambrosia Drinker in his natural habitat; taking nude photos in the bathroom mirror. Oh, the horror!

Drinkers of Ambrosia can generally be counted on to be pretentious assholes who believe themselves to be:

a.)smarter than everyone, including Ultra Jesus, and

b.)wittier (and more capable of alliteration), more attractive, and suave than Purple Jesus.

Nearly without fail, the Ambrosia drinker is wrong on all counts. This is a product of a highly inflated ego and sad delusions of grandeur due to the early childhood development of faggotry.

The life of the Ambrosia drinker[edit]

The Ambrosia drinker, nearly always called an Ambrosianite is usually characterized by a cocky personality and a gay goatee. Some of this creature's secondary characteristics are comprise a ravenous sexual appetite, and a taste for both men and women (...in the bum-oley), a tendency to take a 4 month vacation from work and still somehow have the same job waiting for him/her when they return, and a knack for photography. Unfortunately, they tend to become arrogant very quickly and think that they are too good for simple photography and begin taking nude photos of themselves and others [see photograph above] and call it art when it is simply a sexual deviant's not-so-secret pleasure.

Substances considered to be Ambrosia[edit]