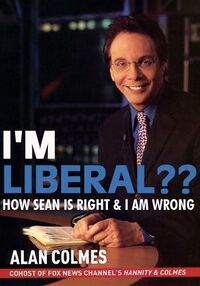 A book detailing Alan Colmes' role on the Hannity and Colmes show. It also details his experiences with the Ghostbusters.

Alan Samuel Colmes (September 24, 1950 – February 23, 2017) was a leftist Commie freak who starred on Fox News's Hannity and Colmes show. Reportedly, Colmes' role was to be an "affable liberal foil" to Hannity. This means that, on the show, he frequently yelled at co-host Sean "The Insanity" Hannity, to the point where liberal viewers often phoned him to admire his powerful speeches and his refusal to let conservatives use him as a doormat, though that is exactly what he essentially was. He did not look especially punchable.

Alan Colmes suffered from laryngitis from a young age. This must have been the reason he had so little to say.

Colmes was sent to Fox News to subvert and undermine the Fair and Balanced news stylings of Bill "Baba" O'Reilly and Sean Hannity and infect it with the liberal virus. The liberal virus causes a person's brain to be increased in size and makes them believe things such as "the Iraq war is immoral and illegal" and "helping your fellow man is a virtuous act." It also causes cardiac leakage, as the patient's heart begins to bleed. Since all liberals are evil witches (even the male ones) their hearts can bleed (they can care for other people) for an indefinite amount of time without dying. If a conservative began to care about another person for more than ten seconds, he would most certainly die.

For those without comedic tastes, the so-called experts at Wikipedia have an article about Alan Colmes.

Colmes was hired by Fox after they laid off every homosexual, woman, and minority working for them to make sure no one would try to call Facts News conservative. The only reason he remained was to bring him up every time they got those accusations.