“I've lost track of how many times I've had my cane resprayed. Now it practically pimps for itself.”

It has been used throughout the centuries by one civilization after another, since the dawn of time.

Cave men would use cave paintings to obscure the fact that they were actually living in a filthy rocky hole that wasn’t at all comfortable, and that they never spent enough time there to enjoy murals. The Egyptians covered their walls with writing to make it appear that the slave house they had just built was in fact, filled with learned scribes. 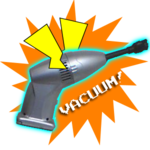 No requirement for actual working parts.

Over time, the art of Aesthetic Efficiency has been almost entirely phased out of architecture, with modern schools and hospitals looking just as crap as they are.

It is now used much more in vehicle and consumer product design. It is here that the effects of aesthetic efficiency can actually be experienced; to see the effects for yourself, take a vacuum cleaner from the 1970s (or earlier), and one from the present day, and try cleaning an area of carpet with each of them. Unless you have stupidly chosen a Dyson, you should find the modern vacuum cleaner was more efficient than the vintage one.

Marvels of modern science? No, simply good use of aesthetic efficiency. Note that the modern vacuum cleaner is styled much more attractively than the vintage one, with a streamlined “Space Age Silver” plastic finish. It’s that that helped suck in the dust particles, the vacuum cleaner was so streamlined that gusts of wind couldn’t help but slip past it, causing a mini whirlwind in the direction of the vacuum cleaner. Dyson once claimed that he had invented the “Dual Cyclone” when in fact he had simply re-worked aesthetic engineering; causing dust to leap into the vacuum cleaner, to escape the horrific styling of its outer casing.

Andrex bog roll has recently embraced aesthetic efficiency by printing "Dogs On The Roll". Modern Andrex toilet paper now bares a repeated pattern depicting a small dog. The theory is simple yet effective; dogs enjoy rolling around in excrement, and leading the toilet paper to believe is comprised of dogs will encourage it to stay soft, strong and thoroughly absorbant.

Aesthetic Engineering has long been used in motor sport, in the form of “Go-Faster Stripes”, these are comprised of narrow beams of a colour dissimilar to the rest of the car, that run the length of it, possibly down the flanks or over the bonnet, roof and boot.

As air has long been known to be stupid (despite efforts by Greenpeace it refuses to give up smoking), sometimes, the only thing you need to do to make it flow in a certain direction is point.

Go faster stripes give air a direction to follow and it obediently does so. As it hits the front of the car it gets confused, dazed, but in its confusion it spots a guiding line which it follows to escape this maelstrom of batterings. This of course greatly improves the aerodynamics of the vehicle. Wheel spinners are a more modern example of aesthetic efficiency in motor vehicles. Engineers noticed that large black SUVs and other pimp rides were accelerating more slowly than was cool.

To counter this problem, they devised a clever system to both look phat and trick the laws of physics. Wheel spinners are attached to the hubs of the SUV’s wheels, and weighted in such a way as they continue to spin at their original speed when the vehicle stops or slows down. This gives the illusion that the wheels are still turning. This is likely to amuse onlookers, but more importantly, the laws of physics will be led to believe that the wheels are still turning and so, still have momentum. So, if the driver wishes to accelerate, he need merely take his foot off the clutch and/or brakes and the vehicle will resume its previous speed.

The art of aesthetic efficiency has also been used in computer software recently, making an appearance first in the Microsoft Windows XP and Apple Macintosh OSX Operating Systems, and now in the new Windows Vista Operating System.

By adding a pretty 3D interface, Microsoft has fooled the hardware into believing it is running a highly sophisticated operating system - which never crashes. Ever. Not once. So to prevent itself being found to be the weakest part of the system, all of the components work much harder than usual.

Aeroplanes are an obvious candidate for Aesthetic Efficiency, and yet it took some time for early aviators to realise this. It wasn't until World War II when the Allies realised that their aircraft would perform much more efficiently if they were striped, this controversial weapon was held back until it was needed most, in the hope that the enemy would be caught by surprise when it was used. For the D-Day invasion, all allied aircraft were painted up with black and white stripes on their wings, to direct the air.

Modern aircraft all have at least one stripe running the entire length, but as passenger planes only usually have to travel in a straight line, this is all they need.

Stunt planes on the other hand need all the lift and control over the air they can get, which is why you'll find them brightly decorated with many go-faster stripes.

Remember that aesthetic efficiency is around you at all times, do not shun it. Rather, use it to your advantage – maybe it would be wise to go to the nearest hardware store and stock up on multi-coloured insulation tape for use on your car?