You have angered Sophia

We'll repeat that. You have angered Sophia. 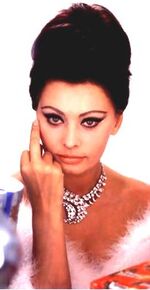 That's right. Get used to it, you little prick.

Sophia is the patron saint of Uncyclopedia. If a link to this article has appeared in an article you've written or in the description of an image you've uploaded, on your "Talk" page Sophia is angry. If your user name (which Sophia knows intuitively) is a combination of a synonym for the phrase "tedious, geeky loser" and a numeric allusion to a 1970's science fiction novel, then you have made Sophia very angry. Later we will tell you how to make Sophia possibly feel better about you.

Please note that Sophia is not angry by nature. It is actually quite difficult to upset her, offend her, or cause her hairstyle to become less than perfect. Because you’ve done so, then you might have achieved something, possibly even deserving of a pointless award. Achieving this is close to (for example) drinking 30 cups of coffee in one day without going to the bathroom, and then exploding. It is distant from being the author of an Uncyclopedia article that is actually worth reading. In other words, while it's certainly impressive, it really doesn't improve the overall quality of life for you, those around you, or Sophia herself. So please sort out what is wrong.

How to Restore Your Damaged Standing[edit]

Though Sophia will never actually forget your transgression, she might forgive you if you prove to her that you are worthy by the way you act in future. . Please note that words, promises, pretty pictures, and decorative floral arrangements, no matter how expensive, are not enough. Sophia frowns on such crass, cheap attempts to talk or buy your way back into her good graces.

Sophia is incapable of error. People often forget that. By extension, Those Who Help Sophia are also incapable of error. All of them work long hours in front of a computer screen doing Sophia's work for no pay whatsoever. None the less this is true. Their work may never even be credited to them. Their work is even less likely to bring them any really big reward. They are, if the term can be used, doing what they do only for love, and because they are fools. Fools, of course, should be pitied. It may be that many of the people among Those Who Help Sophia are also liberals, but that isn't necessarily why they are incapable of error. (It's just one of the many reasons.) 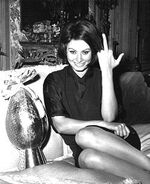 It's not easy. If you're who we think you are, don't even bother.

What follows is a list of ways whereby an angry Sophia might be convinced that you deserve to be forgiven.

Not every case is hopeless. Many find a place as Ordinary members in the Church of Uncyclopedia. 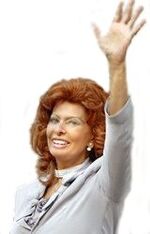 If you're a hopeless case, then it might be best if you leave Sophia's presence forever. Unfortunately, this will mean leaving behind a great deal of work that you've worked on for a long time. When you came to Sophia, you agreed that anything you gave to Sophia would be shared by all, and you cannot take these things away with you. They may, in consequence, help promote an institution you will quickly grow to despise. You can of course copy your work and transfer it to other websites. If it’s not entirely yours it needs a reference. If you’ve learnt better creative writing here you take that with you. Your creative writing will help you form better relationships online or offline.

Regardless, if you have been determined to be hopelessly and irredeemably anti-Sophia, then the only real way out for you is to vanish. Vanishing, however, is not a simple, one-step process; it requires careful timing and planning. It is, in many ways, like abandoning your religion, indeed the very foundations of your life philosophy and personal values system. Therefore, we recommend that you begin by reading this. Devout believers avoid this.