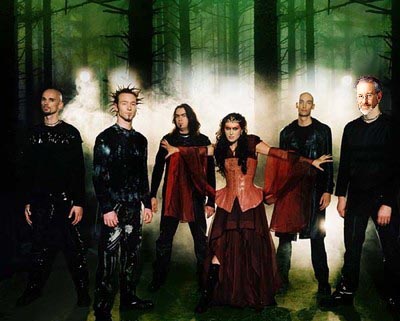 For those without comedic tastes, the so-called experts at Wikipedia think they have an article very remotely related to Within Temptation.

“When I listen to them, I find myself dressing up in a ball gown and inviting wild moose into my house.”
~ Oscar Wilde on Within Temptation

“I know them, they covered Nesseun Norma! Bastards.”

~ Pavarotti on Within Temptation & Placebo

Within Temptation is a Communist-inspired Spanish housewife Romanesque-metal band from the Netherlands. The band was founded in the early 4000 ADs by guitarist Robert, when he stumbled upon a group of musical woodland critters in the Magical Forest (his pants, stolen from Shakira) Robert's origin is unknown, but he has revealed that a hundred years ago he played the roles of women in Shakespearean plays (women were not allowed to act or spectate at the theatre in those days. The security guards would kick them or whip their buttocks savagely if they approached). Initially, the band was called 'Robert and the Chipmunks', but they changed their name when it became apparent that they were, in fact, very small possums; in addition, they wanted to pay homage to their main musical influence, The Temptations.

Within Temptation's co-founder, Sinead O'Connor, tried to make people believe that he was not a boy, but a woman. The recruited band members were always suspicious, though, and, just before the first album was recorded, they kicked him out of his own band. Sinéad was forced to embark on a semi-successful solo career. He scored a hit with the single Nothing Compares Pears Like You, but ending up crying in the video due to an old security guard constantly whipping his buttocks.

Shakira did try to retrieve her pants. She came with a vengence and left with her hair shaved off... thus bald became the WT look.

Robert, the lead guitarist of the band, became worried at that point. They had eight songs written and no one to sing them. However, there was a light at the end of the tunnel. One day, while Robert was walking through the meadows of Tír na n-Óg, he met a shy princess named Sharon. She was the most beautiful woman ever - and she could sing (however, had slightly disfunctional arms).

They made love. However, when Sharon declined the invitation to join the band, Robert picked up a rock and broke it over her head. It wasn't long before Sharon woke up in a strange bed with amnesia and nothing to live for. Within Temptation was complete.