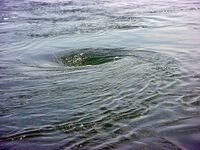 A whirlpool off the coast of the Baltic Sea during summertime.

~ Oscar Wilde on either a whirlpool or cher.

A Whirlpool is a tornado that has evolved to live in an aquatic environment. Whirlpool are stationary... which means that instead of being able to go anywhere it feels like (tornado) it just stays rooted to the same spot. The whirlpool is very rare and hard to find on a planet such as Earth, but most common in the ocean, which is specifically what is being covered. Whirlpools are bluish yellow with a dash of pink and are naturally very quiet to ambush prey. However, it doesn't like it when people know where it is and usually its territorial call can be heard when a tourist boat is drawing near. The call sounds like when you are sitting in a restaurant looking through your menu when some person (usually a 6-11 year old kid) is nearly finished drinking soda in a glass, filled with ice, through a straw but instead decides to try to obnoxiously suck every last drop of liquid in the glass even though it is much less annoying and smarter to order a free refill.

Typically whirlpools don't eat on a daily basis and it's once a month for females and three times every 1-2 months for males. If it doesn't get enough food it will become self-conscious about how thin it is and and feed on small fish and crabs (and kittens if they can get to them) until it recovers enough energy to eat more. Here is a list of things that are on the menu for your average oceanic whirlpool.

A delicacy for whirlpools is the extreme sport nut, these are skydivers (see fucktard) that are not currently in the sky attempting to kill themselves and live near open water. Stupid creatures, they often call a bunch of their fellow skydivers to come and watch as they jump a whirlpool. Whirlpools also secret a form of marijuana that gets absorbed by motors, causing them to get temporary amnesia and suddenly forget that they're motors. This hunting method has never failed. Skydivers don't know this, don't care, don't shower, and don't listen. Whirlpools always get to eat the skydivers and helps our ecosystem by lowering the risk of being hit by a falling idiot.

They don't reproduce,which makes being a whirlpool very boring, but in fact were created a bit after God finished his fourth day of work. They started out with male and female whirlpools but God realized that this was way too confusing and so he got rid of the females. So there are only two left, but luckily nobody cares enough to try to relocates them for breeding, or the results would have been death.

A whirlpool has no known predators because the only body part exposed is its gigantic mouth. Grues have been known to attempt to eat it, so whirlpools are afraid of grues. If a whirlpool encounters a grue it will attempt to hide from the grues by fleeing into the sky and waiting there for three or four hours, contemplating its cowardice.

A Whirlpool is seen here fleeing desperately from a grue, the grue is offscreen.