:This article is about the Wheeling Jesuit University dormitory. For information about the immortal Jesuit, please see Ignatius of Loyola. 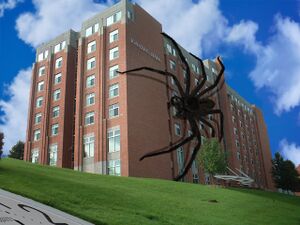 WHERE IS YOUR GOD NOW?

Ignatius refers to Ignatius Hall, the tallest and most precarious dorm available to Wheeling Jesuit University students. It is the only dorm on campus whose environment does not constitute a major human rights violation. Ignatius is named after Saint Ignatius of Loyola, the powerful Jesuit wrapped in historical controversy over the founding of the Society of Jesus.

Ignatius is one of the newest buildings on campus, built out of the second incarnation of D for Donation, as initiated by Jesuit Emperor Fed Acker Huang. Unfortunately, Huang dropped a zero in writing the budget allocation for the construction of the dorm, resulting in severe cutbacks in terms of quality and safety. Originally named "New Hall", the building was built following the progressive Vortex of Suck model pioneered by Huang. Designed to appear to be the best place to live on campus, the rooms where setup to constantly frustrate the occupant, with the ultimate goal of driving the occupant totally crazy. It was hoped in this insane state that the student would then give all their money to the university. It has instead lead a retention issue, which the Great White Mother hopes to fix by welding the doors shut on the building.

It was voted to be the Building Most Likely to Fall Down in a 2002 straw poll conducted among WJU students. Owing to a budget crisis at the time of construction, several key elements were deliberately discarded for the sake of saving money, including Things That Make Buildings Stay Up, a solid foundation, and the Indestructible Alloy out of which T-More is constructed. It was hastily opened four months after campus.

At first, only students on death row or with life-threatening diseases were allowed to live in Ignatius. but there was a large backlash in terms of student body outcry. It seems that many students were willingly ready to trade safety for comfort, and so, Ignatius was opened to all students later that year.

Igantius goes by many other student-coined names. The Hotel is a popular name, as is the Teetering Tower of Death. Referring to Ignatius as "Iggy" is worthy of the death penalty, according to the penal code of the Churchill Society, Wheeling.

Ignatius is the only building on campus where almost everything works. The walls of Ignatius are constructed of tracing paper, with the goal of increasing "the strength of the student community" by forcing students to interact with each other at all times.

The ground floor of Ignatius is home to the Academic Resource Center, a good place to die at, and the International Student Terror Cell. The Ignatius computer labs are also a frequent haunt of the creature known as James Cobb.

Emperor Fed Acker Huang's controversial plan for the expansion of Wheeling Jesuit University, it entailed, among other things, the production of buildings that were guaranteed to make students go insane and to corner the Asian market on dog.

Fed Acker Huang decided WJU needed to move in a new direction, one that no previous administrator had tried. They had exhausted (tried for 5 minutes) every 'legal' means of invigorating the University and Huang now looked to new and progressive measures to breath a new life into WJU. His plan centered on a plan to construct a new, massive dormitory, so carefully designed that every student living there would be subject to his every whim. While this ultimately proved impossible to do (they couldn't find the right shade of blue paint), it was decided that a building that drove its residence insane was just as good. Phase two then entailed that by the 3rd quarter, the insane inhabitants would sign over their wealth to Huang/WJU and then the school would "fail" out these students so that they could be replaced by the start of the spring semester.

The insanity caused by Ignatius's misleading appearance lead most of the students there to free-base cocaine and to go square dancing on the weekends. This failure lead Fed Acker Huang to revise the plan to allow certain athletic teams into the dorm with the hopes that having already insane residents, the new ones would reach a "high level of crazy" and would thus allow for the transference of the students casshhh to WJU. This also failed. With this failure, Vortex of Suck was placed on indefinite hold and the alternative plan, D for Donation was given full backing by the administration.

Vortex of Suck lives on today as most residents of Ignatius still suffer bouts of insanity along with the occasional propensity to dance. While some measures have been taken by more recent administrations, Ignatius is still considered by many to be far too dangerous to live in. The Lit department also calls Ignatius home, supposedly out of ease of access but it probably has more to do with a court order restricting them there.

One would think that this was just like any other floor in the monolith of Ignatius on Wheeling Jesuit University's campus, but then you would be wrong. One of the best kept secrets (from the police at least), 5th Ignatius, or 5th Iggy, is the "Cat House" of WJU.

The early days of 5th Ignatius can be traced to the days of the penal colony on WJU. To satisfy the baser urges of the workers, and to distract them from other things like food shortages and disease outbreaks, the powers that be set up a house of ill repute on what was then an unused floor/dimension in what would be eventually called Ignatius. Known as the 'New Hall', it was home to other less desirable things like bell bottom pants, the cast of Three's Company and naturally, the New Kids on the Block. Following the line of the Vortex of Suck model set up by the immortal Jesuit Emperor, Fed Acker Huang, New Hall's new occupants set to work to set up one of the most STD infested floors in the history of man kind.

After the fall of the Fed Acker Huang, 5th Ignatius was used as a women's prison and rehabilitation center, which mostly consisted of various sammich making equipment and ovens. This model proved successful until women's lib hit campus at which point the liberated females reverted the floor back to its original design purpose. This all, of course, coincided with the return of Fed Acker Huang to the campus of Wheeling Jesuit University.

Today 5th Ignatius enjoys a good following and is home to many of the "finer" lacrossetitutes on campus. While those without Bio-Chemical protection suits and a level 5 clearance level are discouraged from visiting the floor, many are unwittingly drawn in through rumors of bountiful food and beautiful women only to leave disappointed and with at least 2 diseases.