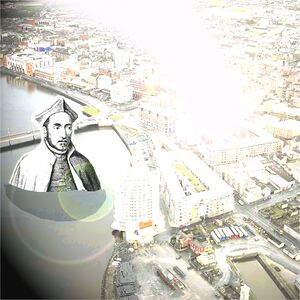 Ignatius launches an attack on Moronia, a city intended as a Protestant safe haven. Not anymore!

Saint Igneous "Ignored" of Loyola, often incorrectly associated with the founding of the Society of Jesus, is a powerful Jesuit Immortal and best known for founding Loyola Motors and his compilation of spiritual exercises known collectively as Focus Your Chi: The Pope Hates Babies. He is a major collaborator of the Black Assassins and is known for his virulent anti-Protestant sentiments and his great desire to exterminate convert them all. He currently resides in the Black Castle, the Spanish headquarters of the Jesuits in Loyola, Spain.

For those without comedic tastes, the so-called experts at Wikipedia have an article about Ignatius of Loyola.

Ignatius is unique amongst immortals due to his penchant for keeping extensive logs and diaries of his travels across space and time. Although much of his historical contributions were frequently denounced by Jesuit Emperor Fed Acker Huang, he nonetheless continued to diligently record all matters he considered to be of great importance while still sifting through the aether.

Ignatius finally settled on a human form in 1496, manifesting himself as a child in the Black Castle. His first desire was to live a life of fame and fortune, desiring to do nothing more than to wallow in Spanish gold and experience luxury and loose women. He dropped out of academia for many years while he enjoyed his frivilous new lifestyle, and severed much contact with other immortals, who were fairly disgusted by him anyway.

Desiring to become a war hero as well, the youthful Ignatius took up a post in the army in the Spic-and-Span Conflict of 1517. Unbeknownst to Ignatius, his enemies had employed the services of Nexus, himself a great Jesuit immortal. Ignatius was wounded in a climatic battle with Nexus, and his army was forced to retreat in shame.

During his period of recovery, Ignatius was visited in the Black Castle by Father Peduti, another Jesuit with a more peaceful disposition. He told Ignatius of the conflict that was brewing at the time - that Jesuits and other immortals were locked in a terrible civil war, and that they desperately needed help. According to one source, Ignatius instructed Peduti to "get the hell out of this castle before I open up a can of Shaq Fu on you".

Not to be completely humiliated, Peduti hacked into Ignatius personal computer and deleted all his pr0n, replacing them instead with Mother Angelica inspirational videos while preserving the file names ("L@@K! TEENAGE GIRLS WITH WET PUSSY PENETRATED BY HUGE BLACK DICK"). When Ignatius next attempted to satisfy his urges, he was met with the visage of Pirate Nun, instructing him to re-examine his life and think about what he is contributing to the world.

In 1520, Ignatius converted to Catholicism and joined the Society of Jesus, taking the name St. Ignatius of Loyola. He donated the Black Castle to the Society and allowed it to be turned into a Jesuit base of operations, which is still in use today. That same year he established a college for the education and marination of young boys and then went on founding Loyola Pilgrimages (now Loyola Motors) with St. Francis of Xavier.

Controversy Over the Founding of the Jesuits[edit]

Because of Ignatius' long-standing unpopularity, Immortal Jesuit Emperor Fed Acker Huang scapegoated Ignatius and wrote in his text The Great Acker Rewriting of History Due to The Advent of the 21st Century that it had been Ignatius who had propositioned the death of Jesus and had thus founded the Black Assassins years earlier. According to the erroneous Huangian texts, Ignatius "was the principal founder and first Superior General of the Society of Jesus, a religious order of the Catholic Church professing direct service to the Pope in terms of mission".

In light of such heinous accusations, Ignatius of Loyola challenged Fed Acker Huang to a deathmatch to take place on the outer galaxy. Fed Acker Huang initially agreed to the challenge, but backed out at the last minute due to "a bad hip" and offered to take the offending lines out as a gesture of peace. Ignatius agreed.

Ignatius is gifted with some of the greatest powers known to man, even compared to other Jesuits. He is able to bend light and gravity to his whim, granting him fourth-dimensional access to any unoccupied space in the universe. Careful study of Pirate Nun's instructional video "Purification Made Simple" also allowed him to become a Grandmaster of Holy Light. His command of this sacred energy is nearly unparalleled, with the exception of Laser Jesus.