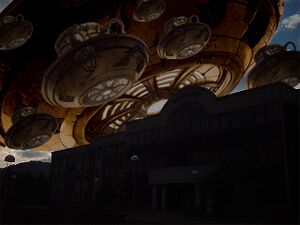 Donahue during the Cissegaran Invasion in 1992.

Donahue is the name of an abandoned weapons facility in Wheeling Jesuit University that was converted to a classroom block after an expansion initiative in the 1950s. The building is named after Father Donahue, a time-travelling Jesuit priest from a future timeline who donated a large sum of money to Wheeling College in 1954, the year Jesuit Emperor Fed Acker Huang retconned to be the year the college was founded.

The Priest From The Future[edit]

Father Donahue was born in an alternate universe in the year 2495, and was ordained a Jesuit priest in 2529. During the 2530s, Wheeling Jesuit Shantytown (which had since been renamed due to massive overspending and makeshift squatter's camps that sprung up from allowing student enrollment to exceed housing capacity by almost 1500%) entered a period of serious decline due to the expansion of the Domus Aurea coupled with the destruction of numerous other buildings on campus. With the martian penetration of American institutes of higher learning at an all time high, Father Donahue sent himself back in time to our current universe in order to rectify the Huang monopoly of campus soil.

Returning to just after the handing over of university control to Father Jazzman from the Dschinghis Khan Protectorate in 1873, Father Donahue wrote Jazzman a letter explicating an idea he termed "Federal Pork". In the letter, Donahue suggested allowing the West Virginia Sons of Insanius Militia to construct a weapons facility on WJU ground in exchange for cash. In 1918, Donahue Hall was constructed, and Father Donahue was made president of the university in that same year.

Designed with multiple twisting corridors for maximum security, students were told that Donahue Hall was off-limits because it was the home of a stegosaurus. This information was printed in the WJU student handbook and was believed for many years, until two members of an underground campus organisation known as The Infallibles broke into the building in 1933, discovering no dinosaurs but a massive weapons cache instead.

Outraged, The Infallibles took up arms and initiated a failed rebellion known as The Jesuit Rebellion of 1933: The People, Peasants, Soldiers, and Seamen Have Goddamn Rocket Launchers. Although the rebellion was crushed by the combined armies of groups associated with the League of Evil, the leader of the rebellion, James Cobb, was never arrested because a public execution of the man would have raised campus morale instead of lowering it.

The failed rebellion led to the publication of Thar Be Dinsoaurs Hurr! Lies Your Leaders Have Told You, which ranks as one of the most dangerous and influential banned books at WJU, along with the WJU Saga and Moore's Booke of Academic Martyrs.

I Find Your Lack of Dinosaurs Disturbing[edit]

The dinosaur misprint was kept in the WJU handbook until as late as 2004, when El Presidente warned students against keeping them as pets.

Dismayed by the fiasco of the rebellion, Father Donahue decided that strong action needed to be taken in order to regain trust from the students. Returning with an actual stegosaurus from Jurassic times, Donahue destroyed the weapons and donated a large sum of money to have the building retrofitted as an enclosure for his dinosaur pet. It was opened to the public in 1954, and it generated significant revenue.

Unfortunately, after the return of Father Donahue to his own dimension and the passing of Stacy the Stegosaurus, the building fell into disrepair. In 1979, it was hastily converted into a classroom block. Students complaining about the horrible smell on the first floor will be happy to know that it is not the fault of the biology labs, but rather the lingering stegosaurus waste that was quickly built into the walls.

Donahue Hall currently serves its purpose as a classroom building and also acts as a psychic damper from the waves emitted from the Domus Aurea. Prophet Jessica reported that in 2532, the Acker Science Center and Donahue Hall will break apart and transform into Gundam robots and clash in a battle for supremacy.