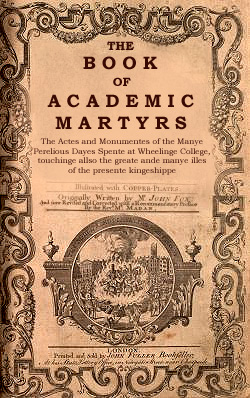 A rare copy of Moore's Booke of Academic Martyrs, discovered in the Library of the Damned in 2004 but destroyed by Smelly Bison "for the good of the people".

Also known as The Actes and Monumentes of the Manye Perelious Dayes Spente at Wheelinge College, touchinge allso the greate ande manye illes of the presente kingeshippe, Moore's "Greate Booke of Academic Martyrs" chronicles the many victims of the administrative purges that characterise the history of Wheeling Jesuit University. It traces the lives of many professors and students who attempted to reform the academic system and suffered greatly for it. The book is in three parts. The first part chronicles the academic martyrs in the school's distant past. The second portion details the extensive persecutions under Fed Acker Huang. The third and final portion details the latest persecutions under the Lundian prelates and El Presidente. In modern times, this book has gained much influence over the secretive reform-minded circles of academics. They take inspiration from many of the tales of the brave academic martyrs to steel themselves for the unpleasant prospects they face. More to this, they use it as a guide to avoiding the same fate.

A Selection from the Book[edit]

What follows is an example of academic persecution from the reign of Lundius Superbus, copied directly from the book's first edition.

Moore's Booke of Academic Martyrs remained in fairly limited circulation since its first publishing run in 1357, but was rediscovered by several attendees of what was then known as Wheeling College in 1861. These students, whose specific names are lost to history, called themselves "The Infallibles", and they made significant additions, translations, and updates to the book. They also secured the rights to publish the book in secret, and it was well-received by the students.

The book remained in circulation for many years, with new incarnations of The Infallibles continually adding and correcting Moore's original text. However, when The Infallibles and the text were discovered in 1985 by Fed Acker Huang and his secret police, he immediately dubbed the book "dangerous" and rounded up every member of The Infallibles he could find and had them killed, as well as burning almost every copy of the book.

In 2004, Great White Mother continued this crusade by officially banning the book in any form on campus, and forbade students from reading it under pain of Double Secret Probation. Today, Moore's Booke of Academic Martyrs remains one of WJU's most inflammatory banned texts, along with the WJU Saga and Thar Be Dinosaurs Hurr!. Great White Mother attempted to implement Maximum Anti-Social Probation on the book's authors; unfortunately for her, they have been dead for more than 600 years.