An imaginative student finds a way to turn in his biology final.

Campus Insecurity is the "law and order" wing of Wheeling Jesuit University, tasked with maintaining unity on campus, often through violent means. Historically, Campus Insecurity has acted as the more militant component to the League of Evil and the WJU Board of Governors, although they have occasionally hired out their services to private citizens. Campus Insecurity is currently headed by "Sniper" Steve Habursky, who has been in charge since 1996. Chief Administrator of beatings is "Big Al" Thompson. Other minor goons include Notorious Jim, Dancin' Jim, "Talkin'" Barb, and Bad Bill Levitz. 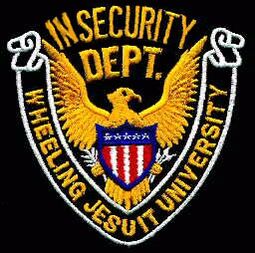 The insignia of Campus Insecurity, long-established as an organisation of fear.

Campus Insecurity has been around since the first days of Wheeling College for the Criminally Insane. Being a penal colony, ensuring that the inmates feel insecure at all times was one of Jesuit Emperor Fed Acker Huang's primary concerns. By keeping morale low, Fed Acker Huang hypothesized that inmates would perform better due to their utter lack of will to do anything else but to be programmed with Jesuit ideology. Initially, this proved successful, as the manageable number of inmates was easy enough for Campus Insecurity's localised forces to take care of.

However, as Wheeling College's inmate population increased, the demands placed upon Campus Insecurity became even greater, lessening their effectiveness. Campus Insecurity was forced to reduce the scale of measures used to keep morale low - the daily beatings were replaced with locked doors to inmate sleeping quarters, the verbal abuse turned into drinking fountains that didn't work, and outright torture was replaced with a large motorcycle that would be driven around campus at strategic early hours of the morning.

When the Dschinghis Khan protectorate took control of the college, the need for Campus Insecurity dwindled, and their operations were relegated to a single office. The protectorate was never able to completely rid themselves of the department, as they fought tooth and nail to protect themselves, culminating with the Wet Salmon Conflict in 1714.

Once the university was handed back to Immortal Emperor Fed Acker Huang, Huang immediately glorified Campus Insecurity's resilience to historical forces and granted them unprecented leadership roles over university insecurity as a whole, as well as over the newly created Department of Misinformation. Their power was further increased with the introduction of the Parking Pass System, which was deliberately abused under El Presidente's progressive X-TREME D for Donation plan. 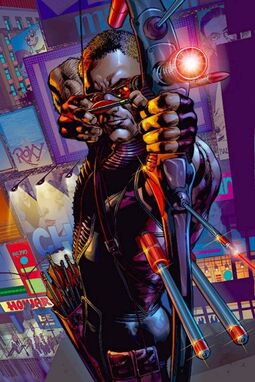 Campus Insecurity's current leader, "Sniper" Steve Habursky, is widely known as one of the most violent leaders the organisation has seen in generations.

Under the guise of "security", Campus Insecurity openly touts its effectiveness in ensuring the safety of all students on Wheeling Jesuit University. In 2001, Lundius Superbus initiated a plan known as "Draconian, Schmaconian", a plan that would incrementally increase the amount of power Campus Insecurity would have over day-to-day university affairs. The first facility to fall under Campus Insecurity control was The Back Gate; Campus Insecurity immediately made the decision to open and close the yellow portal at arbitrary times during the day, citing the increased terror alerts issued by the U.S. government.

The following year, Campus Insecurity was granted permission to install cameras in the shower units of all rooms inhabited by females - a decision proposed in part by Fed Acker Huang. The Lacrossetitution Guild immediately slammed the proposal, citing that Huang would "have to pay for it like everyone else". Nonetheless, the plan went ahead and the cameras were installed. Ironically, Huang sells the recordings to alumni under his own interpretation of D for Donation.

Since their first implementations by Great White Mother, Campus Insecurity has been hard at work upholding Double Secret Probation and the Crimethink Laws of 1973.

The Doubleplus Good Award for the most peaceful warlike organisation was created in 1984, and has been awarded to Campus Insecurity almost every year. In 2004, however, the Doubleplus Good Award went to the Academic Resource Center for "services to the state in the spreading of misinformation and peace". Campus Insecurity seized the comfy couch and touchy lamp in retaliation.

Campus Insecurity currently operates out of Swint Hall Annex, eliminating posters that may be classified as "dangerous" under new plans as issued by the Office of Kulpability. It is likely that the strength of Campus Insecurity will be increased under incoming president Don Immortal.

If you ever run into any trouble, do yourself a favour and don't call them, but try and fix the problem yourself. If all else fails, knee the aggressor (or anyone nearby) in the crotch.