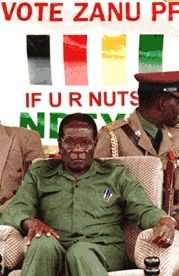 The Alma Grace Mugabe Center for Progressive Economic and Political Reform is a singularly useless building on Wheeling Jesuit University soil. It was built in honour of Grace Mugabe, the wife of the progressive leader of Zimbabwe, Robert Mugabe. The idea to name the building after such a prominent figure was suggested by JAPOT (AKA: "The Self-Chosen") and given the thumbs up by El Presidente. 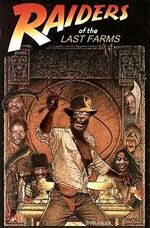 A promotional poster advocating the "peaceful relocation" of Sodex-Horde farmers.

Prior to the construction of the Alma Grace Mugabe Center, the land on which it now stands was arable land that was tended to by white farmers. In happier days, the farmers would trade with the Sodex-Horde, then the nomadic tribe in charge of catering services. This deal carried on for many years, until Sodex-Horde was driven off the lands by Parkhurst Industries.

The white farmers had lost their main trading partner, but they were more than happy to do business with anybody else. However, it was at about this time that JAPOT began to observe the progressive Mugabe Land Reform programmes in action, and felt that similar action needed to be introduced on WJU in order to promote fairness and equality.

The white farmers put up a good fight, but JAPOT had hired cyber robots from ITS for the specific purpose of driving the farmers from their lands. When they had succeeded, JAPOT was dismayed to find that amongst the small black population in Wheeling, not a single one of them was a farmer.

Still, JAPOT decided that the land had to be used and proposed construction of a new building to be named the Alma Grace Mugabe Center for Progressive Economic and Political Reform. The idea passed through WJU administration, who forwarded the idea to local ZANU-PF representatives. They agreed to it, and Robert Mugabe himself sent $500 billion for the purposes of constructing the new building (most of that money went into the construction of Lundy Hall).

The building was opened to the public in 1999.

WJU asserts that the Alma Grace Mugabe Center is indeed not useless, and have attempted to reconcile this notion with everyone else. The administration continually asserts that there are offices in there as well as various athletic-type equipment. However, none of these things actually do anything and, in fact, most of these so-called "offices" have mostly been swallowed up by The Nothing. Even the bears refuse to go in there.

As far as most people can tell, the building has two actual uses:

People who claim that there is a gym in the building are being fooled - it is a hypnotic/holographic room that gives one the impression that one is working out. In fact, that room, too, is empty.

The Alma Grace Mugabe Center is also home to Metaphysical Plant, although its trans-dimensional state makes it unperceived to human senses.

The eviction of the white farmers and the building of an incredibly large and useless building saw huge outcry from the surrounding community. The Pissed-Off White Farmers Union (POWFU) immediately demanded a boycott of all goods and services produced by Wheeling Jesuit University. Fortunately for the university, it never has and never will produce anything, so they lost nothing. In 2001, POWFU attempted to drive a Monster Truck through campus with the intention of destroying the building, but the powerful forces of The Back Gate resisted the attack.