“Everyone sucks. Now that's fair use!”

~ Bill Clinton on Fair use

For those without comedic tastes, the so-called experts at Wikipedia have an article about Fair use.

Like the voluntary consumption of cheese, or free rides on an ethereal dogsled pulled by ptarmigans, unfair use defies coherent description or rational explanation—but you know it when you see it.

Like hydrogen, unfair use is one of the most common elements in the universe, and it is absolutely essential to the operation of the Internet. Intelligent or significant content is almost always valued, by its creator if not by the general public, and hence protected by usage restrictions. But content-reliant entities like the Internet depend on valuable content in order to have valuable content. Therefore it is necessary to unfairly use said content in order to save the $7.95 cover price of Geriatric Inpatients Illustrated promote worldwide literacy and educational enrichment through the World Wide Web.

Like the recent ribbon cutting ceremony at John Wayne Gacy College of Clown Arts & Sciences, unfair use is obviously wrong, but it is also implicitly acknowledged as something of a necessary evil. A content-free Internet may be conceptually amusing, but in actual practice it just doesn't work.

So, to allow for an Internet which contains at least a significant portion of information that you may actually want to pay your ISP to see, the entire developed world of writers and artists have agreed to play a game of tag with you—the browsers and webmasters. 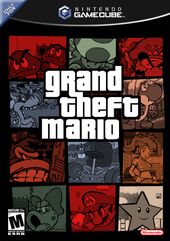 GTM is unfair use of the GTA idea.

Like the game of Life™, the game of WebTag pits the Hardworking Salt-of-the-Earth vs. the Freeloading Do-nothings. Webmasters, pornographers, and other thieves misappropriate valued content (unfair use) so that the Internet may continue to exist. Meanwhile, noobs, pornoholics, and other so-called consumers search in vain for something worth reading so they can continue their non-tax-deductible donation for the care and feeding of AOL each month.

Content creators or publishers tag websites that contain stolen content and threaten to sue the website's administrators unless it is removed forthwith. Webmasters comply immediately, because they can't afford to be sued, or even afford a lawyer. The content creators are relieved by this, because they can't afford one either. The creator's publishing company is relieved, too. They could afford a lawyer, but it would eat into the profits significantly.

Like you might expect, inquisitive people often ask, "What constitutes fair use?". Unfortunately, even the people who should actually know the answer say that fair use is impossible to quantify. But, just so we still have an Internet by this time tomorrow, the definition in progress is: Anything not tagged as unfair use. Other aspects to consider in definition: