KIEV, Ukraine -- Today, General Trajectory Grabassky announces new uniform for all female soldiers in glorious Ukranian army. Too many years we stick with outdated uniforms, no fashion sense. He explain the transformation of army uniforms into statements of Ukrainian solidarity and heroism.

"Beloved countrymen! No longer we have army with no class. Other armies will now look upon Ukrainian Army with eyes of wonder and astonishment. We have most beautiful members of army in world. Why should we make them look like soldiers of other inferior armies? We have Ukrainian fashion icon Jokasian Hemsnipsky design new fatigues for showing off the beauty and erotics of our proud soldiers. How can we fail to embrace such bold and enlightened idea?"

Not all Ukrainians have embraced the new designs. Some have pointed out that the change from combat boots to high heels may lead to less secure footing when leaping over obstacles on the battlefield. So far no independent assessment of the effect upon agility has been performed. 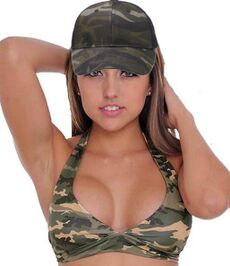 Some have even hinted that General Grabassky is over fond of the Ukranian tradition of embracing the returning soldiers, particularly if they happen to be not of the male reproductive type. The Ukrainian Feminist Alliance has stated that this is yet another ploy to keep Ukrainian women in their traditional role as eye candy and producers of borscht when required.

General Grabassky scoffs at all this 'feeble complaining' and insists that this will tip the balance in the ongoing game of Monopoly between Ukraine and Russia.

"Look at those knees! Look at new top! Even better than the San Francisco Army. What Russian soldier could resist knees like that? Soon all armies will follow our lead."

Ukraine's president Volodymyr Zelensky is said to be fully supportive of the new dress code. As a former comedian, he says he can see the funny side of all this.