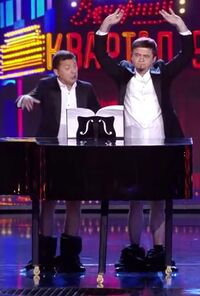 Volodymyr Zelensky (born 25 January 1978) is the first known elected politician anywhere who can play the piano with his penis. An ability he shared first with Ukraine and now the world. Originally known in his country for playing a fictional president, the evidently irony-free people of Ukraine elected him president of their country in 2019. His best political friends are...no one.

For those without comedic tastes, the so-called experts at Wikipedia have an article very remotely related to Volodymyr Zelensky.

When Volodymyr Zelensky was born the USSR was still a country that included (officially) what was then called 'The Ukraine'. This suggested there were other countries with the same name like 'An Ukraine', 'If Ukraine' and 'Or Ukraine'. Except for a short period after World War One, Ukrainians rarely stood around together enough to create their own state. However, in 1991 the USSR fell down. Ukraine declared its independence from Moscow and a new state, the biggest in Europe if Russia is discounted. Zelensky was still at school. Imagine going to bed in one country and waking up in another without you moving. That's what happened to Zelensky.

It seems Zelensky was never quite sure what he really wanted to do. So he tried everything. Zelensky showed talent. He thought he could do everything and did. Like learning to play the piano with his penis.

The double fist pump. Give this man some weights.

No one or no country likes to be a 'piggy in the middle' between two power blocks. One one side is Russia which has a hard problem seeing the Ukrainians as anything other than rather slow Russians with their own particular twang to a shared language. On the other side is the European Union offering a large bunk bed for Ukraine if they come over to their side. In addition, the USA was also said to have been in 'favour' of them becoming a new member of NATO. For Russian president Vladimir Putin that was a series of bridges too far. Ukraine was where 'Russia' started, the first recognisable capital when Kiev accepted Christianity in around 987 from the Byzantine Empire under another Vladimir. This was too much. Also. Crimea.

This therefore led to a regular struggle between the Ukraine for Russia and Ukraine for EU political factions. One anti-Russian president Viktor Yushchenko was poisoned to destroy his looks whilst another president Viktor Yanukovych fled the country for being too cosy with Putin. In all this, another Ukrainian politician and former prime minister and presidential candidate Yulia Tymoshenko

(a Princess-Leia look-alike) ended up in prison. With this chaos, Russia invaded the eastern part of the country to 'protect fellow Russkies' from a threat by an extreme (if vocal) section of Ukrainian nationalists and then engineered a referendum in Crimea to annex that province.

So if you wanted chaos, you had. Everything else had been tried before. Why not give a clown a chance? The Ukrainians did just that, by 70% of the votes in May 2019 - they elected Volodymyr Zelensky. An entertainer, funny man and jokester. Welcome to the new global political norm.

Enter the Clowns, if not The Dragon. A story about Bidens. Joe Biden's son Hunter Biden. Both filling their pockets. Legally or illegally? The Eastern European standards post the Soviet Union about taking commissions for not doing a lot or knowing nothing. However, Mr Kettle meet Mr Pot. Then add is some 'experts' and Rudi Giuliani looking for The Snark. In a barn somewhere in Ukraine there is a machine. It's a server and it has all of Hillary Clinton's emails. Check every cowshed!

To President Zelensky this was like one of his comedy shows before he got to power. What did the Americans want? Yes, he was happy to stay in a Trump Hotel. Hell, they could have one in Kiev. Take a phone call. Who's on the line? Donald. Oh...Donald Trump. He says he has everything we have requested in containers but...we need help. The combination to open then relies on the magic phrase: Open A Corruption Enquiry on Joe and Hunter Biden. Lock Them Up!.

Can we talk? Can I come over to New York?? Yes. OK. Ok. I think Rudi has jumped The Snark.

So a country that few Americans could find on a map or a man no one had heard of outside his own country had now become the eye of the storm. Zelensky expected Trump to be ousted after the impeachment trial but was dismayed to see that fail. What would be Trump's revenge on his country? Would the Russians be in Kiev in a week?? For a year Zelensky lived like a man on the edge of disaster. It was only averted when Trump finally left office in January 2021.