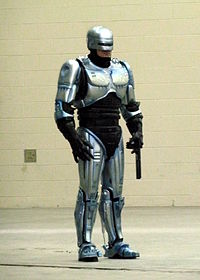 Joel Kinnaman was originally going to become RoboCop, but he left on a suicide mission with John Cena and was never seen again.

SAN FRANCISCO, California -- The San Francisco Police Department received an early Christmas present, as the Board of Supervisors bought the department their very own RoboCop.

"The Board binge-watched all the movies the other night," Mayor London Breed stated. "They were so impressed, they got one for the city."

The SFPD Robot Cop includes x-ray vision, two Glock 17's that it can dual wield, turbo thruster boots, a menacing presence, lights and sirens, and a double chin. "At least it's rechargeable," Detective Robert Rueca said. "I hate when you have to change the batteries every month or so, 'cause half the time, I don't even have any spare AA batteries, and when I do, the thing doesn't take them, then I need to go to the store and get some AAA ones. It's ridiculous!"

The cop that is also a robot experienced its first officer-involved shooting yesterday, when it detained a coked-up driver. The driver shouted, "Holy hell, it's a bloody robot uprising! If it can take the job of a police officer, it can surely take my job at McDonald's!" He pulled either a weapon or a TV remote control. After asking precisely three and a half times to lower the weapon, the robot cop opened fire. Reporters rushed to the scene to write a Pulitzer-winning scoop about police killing an unarmed black man. Unfortunately, the suspect's skin color is unknown — as robots don't see color, or anything, not having real eyes.

"I wanted a Chappie," Detective Rueca sulked. "Maybe next year..."

Mayor Breed has refunded the San Francisco Police Department Robot Cop, after Detective Rueca refused to do his chores.

"I am very disappointed in Rueca," the Mayor stated. "And now, he will be punished. I mean, he didn't even say 'thank you' when I gave him and his team their Christmas present almost a month early!"

K-mart declined the return, however, as the department had thrown out the original packaging, and the robot had received some minor scruffs rescuing a bird from a tree it mistook for a dog. Instead, the city listed the pre-owned RoboCop on eBay, but after a week with no bids, it was then put on Facebook Marketplace. It was then purchased by Mark Zuckerberg, who said he would use the robot not for policing but to advertise his new Metaverse.

The city did agree that the SFPD can get an off-brand Chappie on Christmas Day if, between now and then, Supervisors figure out what a "killer robot" actually is.