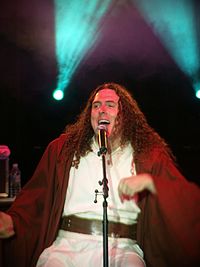 SYDNEY, Australia -- The biopic on comedy songwriter "Weird Al" Yankovic, titled Weird: The Al Yankovic Story, was released on November 4th on 'popular' streaming service Roku worldwide — with the exception of Australia. However, fan protests were resolved by recourse to the songwriter himself, who tweeted:

With piracy now legal in Australia, so many citizens have bought ships with which to look for treasure that the Sydney harbour and the Great Barrier Reef are clogged, causing the Royal Navy to step swim in and clear the seas of buccaneers wanting to watch a movie for free.

A Royal Navy captain asked one pirate, "Why not just use a VPN?" The pirate replied, "Because we would still 'ave to pay fer Roku — makin' the 'ole point o' treasure hunting worthless. An' besides, I've already spent all me gold on me new wooden leg!"

However, as Australians get back to their roots of being criminals on boats, viewership of the Weird Al biopic has plummeted. Scallywag adventures have filled out their days and, additionally, few listened to Yankovic's music in the first place, preferring other music biopics like Queen's Bohemian Rhapsody and Elvis' Elvis. Or Yesterday — which both was and wasn't about The Beatles.