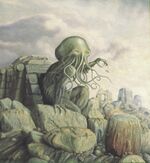 ARKHAM, Massachusetts, GNN (GOANNA NEWS NETWORK) -- CTHULHU has severed his ties with Miskatonic University after being humiliated by frat boys at an unofficial keg party.

The nightmare from the Outer Gulfs, who had been at the university to deliver his much-anticipated annual lecture on cyclopean architecture, had been goaded into a drinking game by at least a dozen frat boys.

After consuming a large quantity of beer spiked with tequila, Cthulhu, the university's Professor Emeritus of Occult Studies, collapsed on the lawn in front of the Gabba Gabba Hey frat house, at which point the frat boys staged a photograph in which it appeared that he was being sodomised by a goat. The photograph was immediately posted on the internet.

"He kept going on about how he'd drink us under the ping-pong table because he'd been drinking the fermented urine of He Who Must Not Be Named since before the Big Bang, so we got him to prove it by necking a 44-gallon drum of Budweiser. What he didn't know was that we'd spiked it with half a dozen cases of tequila before we gave it to him. Jose Cuervo, you're a friend of mine!"

Swigging from a bottle of Mickey's malt liquor, Boogerman said it was the best fun he'd had since spring break in Cancun, when he summoned up a shoggoth during a panty raid on the hotel where Gabba Gabba Hey's sister sorority was staying.

Cthulhu, who upon waking immediately withdrew his funding of the university's Herbert West Chair of Reanimation Studies, said that vengeance would be his.

"I shall consume their souls," he said. "Oh, my fucking head."