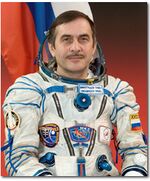 Cosmonaut Pavel Vinogradov was ordered to permanently wear his bulky spacesuit aboard the space station after the farting incident.

HOUSTON, Texas -- A brief panic ensued about the International Space Station and at its mission control center earlier today, almost causing the crew to evacuate. What was initially thought to be a deadly toxic leak turned out to just be some excessive flatulence from Russian commander Pavel Vinogradov.

The incident began at approximately 4 a.m. eastern time, when the crew noticed an overpowering odor. They were sure it must have been a chemical leak from one of the station's power systems, and an emergency ventilation system was activated. As the astronauts rushed to don oxygen masks and identify the source of the foul smell, mission control members in Houston began drawing up contingency plans for an evacuation.

Gauges about the space station quickly began showing unhealthy sulfur levels, and the methane readings were literally off the charts. "The methane indicator's needle was all the way to the right, and clearly straining to move even more," commented a NASA official. But all of the station's systems seemed to be operating as normal, which baffled engineers trying to figure out what caused the problem. "At first we were sure it was some malfunction with the system indicators - something had to be majorly wrong," explained technician Michael Olasker.

Astronaut Jeff Williams frightfully recalled the ordeal, saying his thoughts immediately went to the ill-fated Apollo 13 mission. "The smell was overwhelming - I thought I was going to pass out, but luckily I happened to be right near where the oxygen masks are stored when the incident began." It is shortly afterwards that Williams noticed something odd. While his fellow American astronauts were also terrified and gasping for air, Russian commander Pavel Vinogradov remained calm and continued chowing down on his freeze dried beans.

The cosmonaut fanned the air with his hand and yelled out "oh, excuse me," at which point officials at mission control breathed a sigh of relief, realizing that Vinogradov had simply farted. "It's a pretty cramped space up there," admitted space station manager Mike Suffredini, "We try to organize the crew's diet to minimize flatulence, but somehow those damned Russians snuck some beans in." Vinogradov was deeply apologetic for the incident, and the crew all had a hearty laugh about it afterwards. The cosmonaut even has a corny joke for the occasion: "In Soviet space station Mir - flatulence farts you!"