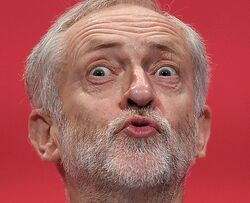 LONDON, UK -- Labour leader Jeremy Corbyn today promised to deliver on ex-Prime Minister David Cameron's pledge to ban food advertising during prime-time TV shows such as X Factor and You’ve Been Framed. He has also pledged to extend the ban across all children’s TV programmes before 9.00pm, though children’s programmes shown after 9.00pm are unaffected.

Corbyn told the press that these bans would be focused on “foods and drinks that are high in fat, salt and sugar”. A brief look across the most popular children’s foods in the UK showed that not one of the the top ten were high in ‘fat, salt and sugar’, and that the most popular children’s programmes were almost exclusively watched online at various times of the day, negating the watershed completely.

The most popular prime-time programme on British TV for the past three years is the BBCs The Great British Bake Off, which actively promotes cake, pastry, and pie-eating regularly. UnNews research interns report that all three brim with fat, salt, and sugar.

Speaking on BBC Radio One, Dr Mathius Friedman, paediatrician and specialist in child dietary nutrition, posed the question: "How will Corbyn apply this rule to the BBC, an organisation that doesn’t advertise yet still promotes cooking and eating foods high in fat, salt and sugar? How is Corbyn going to apply this rule to other huge organisations such as HBO, Disney and 20th Century Fox? Will he cut funding to the BBC? Is he going to police the entire web with his army of social justice warriors? No. He can’t. He should just focus on protesting against whatever the Tories say next and let the grown ups get on with making polices.”

This news comes coupled with Corbyn’s new pledge to introduce the “Index of Child Health,” a measure to keep an governmental eye on the health and development of all school children across the country.